Outsiders might still see Ballito as a charming holiday resort that’s great for fun in the sun, but the area offers so much more to those who settle there.

Just 40km north of Durban Central, Ballito is considered a haven for city dwellers and a heart-filled home for those who live there. Established as a town in 1954, Ballito is famous for its ocean views and a laid-back lifestyle that underpins a sense of community.

Ballito gets down to business

When King Shaka International Airport and Dube TradePort opened in 2010, Ballito came to the fore for many in the worlds of commerce and industry. But the success of this local industry boom isn’t only because of development: it also rests upon a strong element of community support.

Known for his outspoken commitment to the town, Justin Scott is also a devoted husband, father of three and MD of FabMags Publications, a proudly Ballito enterprise. Says Justin, “Ten years ago the town was small and, as a community, we had to support each other to survive. Locals still support each other and there is still a climate of old-school values in a modern and progressive town that is growing up. We honour and respect those that have worked hard and invested in the area to make a living and grow a business.

There is a misconception that because we’re coastal, we’re chilled or relaxed, but Ballito’s people work very hard. Many of the businesses have been established by people who moved to Ballito from upcountry, so they bring that buzz with them and they are as driven and motivated as anyone, anywhere else.

Business is booming in Ballito, but this it hasn’t had a negative effect on the quality of life. In fact, it’s made it even easier for residents to discover and embrace their work/life balance, touching on a firm foundation that’s made for living life to the maximum.

Justin says, “Life in Ballito is really different. When it comes to lifestyle, Ballito offers everything you want for a family: quality time over time stuck in traffic, familiar faces that greet you at the shops, and kindred spirits that support each other. Add in the beauty of the place and it makes for a very attractive place to live. Overall, our mind-set is one of collective positivity: that we as a community can overcome most challenges thrown at us. We also get together to help out wherever needed, as evidenced by programmes like Vision 153, a community-driven support organisation that’s growing exponentially thanks to the golden hearts of the residents of Ballito.

It’s also easy to get the work/life balance right in Ballito: slotting in a surf, run or gym session before or after work is simple, because work and home are close to each other.

Scott says that there is still a lot of opportunity in the North Coast as a second wave of growth has begun on the foundations laid over the past 10 years.

The establishment of three large shopping malls in Ballito bears testament to its development as a commercial hub and its convenient location for residents. Take a leisurely browse through Ballito Lifestyle Centre, Ballito Junction or The Quarter and you’ll find everything you need, within easy reach. Ballito Junction is expanding too, with construction to be completed in 2017.

Let’s talk about the beach

With a beautifully paved promenade that offers you incredible ocean views and the chance to spy dolphins at play (hence “Dolphin Coast”), Ballito’s beachfront is made for family fun. Enjoy a leisurely sunset walk, or take your pick of one of the area’s beaches to enjoy a sunny day out.

Eating out in Ballito

Percentage of total sales listings for the Dolphin Coast - 75%

71% Percentage of total rental listings for the Dolphin Coast

Interest/views in properties for sale on the Dolphin Coast - 65%

Sunninghill suburb focus
People who call Sunninghill home love its strong sense of community, its security and beautiful surroundings.
Suburb focus on River Club
The tree-lined suburb of River Club offers a peaceful counterpoint to the activity in nearby Sandton and Bryanston.
Craft beer 101
Milpark’s Stanley Beer Yard introduces a monthly event to educate guests on the beauty of craft beer. For Joburgers looking for a fun way to spend an evening out, Craft Beer 101 is the perfect answer.
A guide to Port Elizabeth Central
Whether you need to pop to town, the beach, shopping, work or play, this vibey area is central to everything. 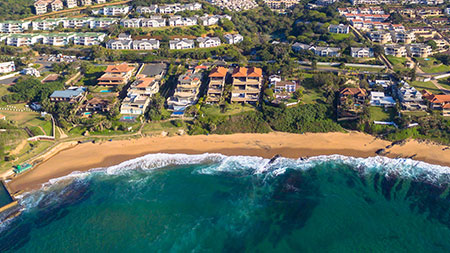 Ballito, on the Kwazulu Natal North Coast, has grown quickly recently. Upmarket estates, restaurants and shopping centres now inhabit areas that were sugar cane fields not long ago. Many families are relocating to the area to take advantage of the relaxed coastal lifestyle that the area offers, even though it is just 30 minutes drive from Durban. Ballito has 3 excellent malls offering lots of retail therapy, great restaurants, private schools, private hospitals and ample sporting facilities. Beside the houses and flats in the main residential and beachfront areas, there are many newly built, secure estates that provide a choice of property types for those moving to the area.
Browse the Advice Centre