Appreciative businessman buys a home for housekeeper of 30 years

Real estate agent, Leonard Ellis, handed over the keys to first-time owner Nancy Witbooi, a housekeeper who received her very own home as a generous gift from her employer.

“Watching our agent Leonard Ellis hand over the house keys to first-time owner Nancy Witbooi will go down as one of the great moments of my real estate career.”

Those are the words from Port Elizabeth industry veteran Ian Olivier, area principal of Pam Golding Properties Port Elizabeth, after Witbooi took ownership of her first-ever home, which was bought for her by her employer as a token of his appreciation for her 30 years of service. 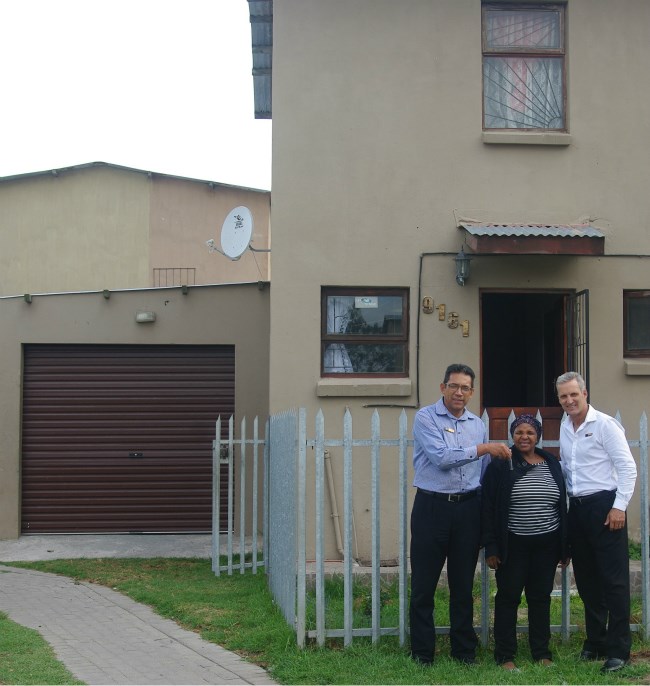 Nancy Witbooi receiving the keys to her home

“In all my years of real estate, this is the first time I’ve been mandated to find a property as a gift for another party,” says Linda de Lange, also with Pam Golding Properties PE and who had been working with the client to sell his own properties.

“After he sold his home in Sardinia Bay, he became concerned about his domestic worker Nancy, who lived in a house on one of his adjacent properties. He told me he felt a responsibility for her after her many years of loyal service and wanted to buy her a house of her own. Nancy wanted a place in Walmer Township close to her family and spacious enough for her and her young granddaughter who lives with her, so I spoke to Leonard Ellis who had a listing there. He took Nancy and her employer to see it, and the rest is history!”

Conveniently positioned just inside Walmer Township, and close to a main transport route, the house comprises an open-plan living area / kitchen, bathroom and upstairs bedroom as well as a lock-up garage. And thanks to the businessman’s generosity it also has a brand new stove, a Christmas present from his family.

According to Ellis, a valuer with a major bank before he joined Pam Golding Properties PE three years ago, prices in Walmer Township range from R80 000 to R300 000 with the average house costing around R160 000. “With limited stock under R200 000, I was surprised that this property didn’t sell quickly,” says Ellis, adding that he has since been approached a number of times by interested parties including a neighbour “who badly wants it, not least of all because it has a garage. “I have no doubt that it would sell for R20 000 or R30 000 more in the current market,” he says.

Adds De Lange: “It makes me feel so good to see that there are people out there who really care about their domestic workers and where financially able, are prepared to help them acquire their own homes.”

This is not the only feel good story for the Pam Golding team. Ellis says he is also working with a client who wants to purchase a home for his grandparents. “The buyer is a Gauteng businessman who, having upgraded himself as he puts it, now wants to do the same for his grandparents. He tasked me with finding a good house in a safe area, which I did and he’s put an offer in on it,” he says. The property, which is in Bethelsdorp, is about 12km away from the Port Elizabeth Central Business District (CBD) and on the market for R600 000. It sits on a one of the biggest stands in the area, is in immaculate condition and has the added bonus of a granny flat.

Ellis puts the price band of “affordable housing” in Port Elizabeth at between R80 000 and R450 000 and says it can typically be found in “townships” such as Zwide, Motherwell, Walmer Township and KwaZakhele as well as in the Central area.

The decision by the South African Minister of Finance Pravin Gordhan in his February Budget speech to raise the transfer duty threshold from R750 000 to R900 000 has definitely stimulated first-time buyer interest in these areas, he adds. “Affordability is obviously key for low income earners, so this, along with the home buying subsidies available from government for qualifying buyers, is stimulating demand among people who want to own their own homes. However, the backlog of first level subsidies needs to be addressed since these apply to purchases of R160 000 by those earning R3 500 or less a month. The sooner this is resolved, the sooner people will be able to realise their dreams of first time home ownership,” he adds.

Currently on the market by Pam Golding Properties in the affordable category is a two bedroom house in Motherwell priced at R130 000. Similarly priced is a one bedroom apartment in Sidwell, close to a primary school and transport routes.

According to Temba Nxele of Pam Golding Properties PE, Motherwell has a small selection of homes under R400 000, including a neat two bedroom house in a quiet, popular area. Fully walled, it offers a full bathroom and generous living area / kitchen and is priced at R330 000. Also offering good value for money is a three bedroom house on a large stand in KwaZakhele for R375 000.

Those wanting inner city convenience can look in areas such as St George’s Park and Central, says Olivier. One of the best buys at the moment, he says, is a one bedroom apartment with parking bay in St George’s Park, close to transport routes and amenities, with a price tag of R340 000. In nearby North End is a spacious apartment with parquet flooring and parking bay for R350 000. In Gelvandale, close to schools, shops and places of worship is a two bedroom house with open-plan living area / kitchen and a separate one bedroom flat, on the market for R360 000, and in Central, R395 000 is the asking price for an immaculate flat with secure parking and sea and city views in a well-managed block.

“We really do sell all prices, all sizes, all areas,” concludes Olivier, whose agents operate throughout Port Elizabeth with selling prices ranging from R110 000 to a recent R16 million record.

Bryanston's lifestyle holds broad appeal
Find out why Bryanston is ideal for those looking for a suburban lifestyle.
Luxury Bedfordview home sold for record price of R30 million
A top end home in Bedfordview was recently sold for a record breaking price for the area, and one of the highest ever on the East Rand.
Pricing your home to sell
In today’s housing market, both sellers and buyers are bombarded with a variety of often mixed messages on pricing their homes to sell, or an array of bargains at reduced prices. 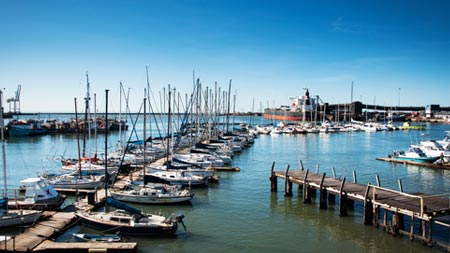