How long your home will take to sell

Selling real estate is not as instantly gratifying as selling shares or cashing in on other investments. Those hoping to sell within the current market are likely to wait for roughly 14 weeks (which is the national average) before closing the deal.

However, Regional Director and CEO of RE/MAX of Southern Africa, Adrian Goslett, warns sellers that the national average might not be an entirely accurate representation of the market conditions within a specific suburb. “Each suburb has its own turnover time. Demand might be high in certain areas, meaning that it will take less time to sell within these areas. Similarly, certain suburbs might be experiencing a lack of interest from buyers, which will increase the time on market for properties within these suburbs. I would advise having an open and honest conversation with a real estate advisor to set realistic expectations around the average time on market within your suburb,” Goslett recommends.

As an example of the varying market conditions to which Goslett alludes, certain suburbs within the Western Cape continue to sell faster than the national average. According to Caron Leslie, Broker/Owner of RE/MAX Property Associates that operates in Atlantis, Ottery, Brackenfell, Table View, Parklands, Pinelands, Kuilsrivier and West Beach, the office’s average time on market over the last three months is 89 days (roughly twelve weeks). Similarly, according to Susan Watts, Broker/Owner of RE/MAX Living, City Bowl properties average 85 days (roughly twelve weeks) on the market, and properties within Milnerton and surrounding areas sell within 80 days on average. 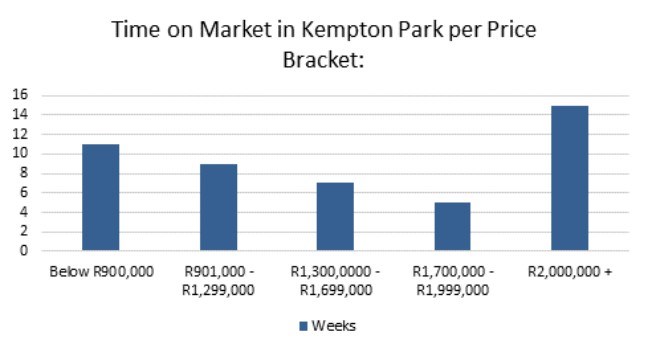 Beyond price brackets and location, setting the correct asking price will also affect the average time on market. According to Nadia Aucamp, Broker/Manger of RE/MAX All Stars, the average turnaround time for properties in Johannesburg South, Alberton and Germiston is between four to eight weeks. “If a seller chooses to price their home too high, this often prolongs the time on market. We therefore encourage our agents to conduct price counselling within the first four weeks on the market. Thereafter, if the price of the property is lowered to a market related price, our agents are usually able to sell it directly thereafter within the second month of having been listed,” explains Nadia Aucamp, Broker/Manger of RE/MAX All Stars.

One final factor contributes to the average time on market: the competency of the real estate agent and brand with which a seller has chosen to partner. “Not all real estate agents and agencies are cut from the same cloth. Partnering with the right brand and the right real estate professional can help you sell faster than the national average,” Goslett concludes.

Thesen Islands remain a stable investment
While most luxury markets have seen a dip in activity, others, such as Thesen Islands in Knysna, continue to thrive despite the economic downturn.
Proposed tourism bill to affect Cape Town property
The Cape’s Department of Tourism published the Tourism Amendment Bill, but what does this mean for the property market?
SA's most expensive homes are in these suburbs
Which suburbs have the most expensive homes in the country.
Browse the Advice Centre