Rather than subsiding to pre-COVID levels of activity, as was predicted in the RE/MAX National Housing Report for Q2 2021, the property market continues to exceed expectations in the third quarter of this year.

Regional Director and CEO of RE/MAX of Southern Africa, Adrian Goslett, says that the results of the RE/MAX National Housing Report for Q3 2021 reveal a still-thriving property market. “Understandably, the third quarter of 2020 was a period of unprecedented activity as record-low interest rates and pent-up demand following the Deeds Office closure drove sales to an all-time high. But, what could not have been expected was that this period of hyperactivity would last as long as it has. It is now a full year later and we are still seeing record-breaking sales volumes,” Goslett remarks.

According to Lightstone Property data, a total of 44,215 bond registrations were recorded at the Deeds Office over the period of July to September 2021. The RE/MAX National Housing Reports then reveal that this figure is 9% up from last quarter and, quite remarkably, 20% up on Q3 2020’s figures.

The number of transfers (both bonded and unbonded) recorded at the Deeds Office between July to September amounted to 60,025*. This amount is 2% up on last quarter and 25% up YoY.

Of the 60,025 transfers, a total of 29,553* freehold properties and 14,977* sectional title units were sold countrywide (these figures exclude estates, farms, and land only transfers). The number of freehold properties registered increased by 20% YoY and remained steady QoQ. 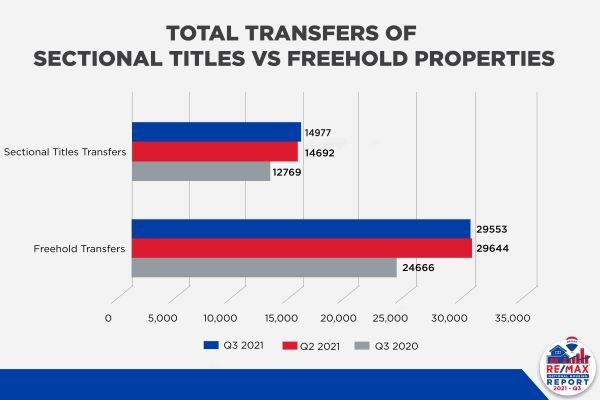 Along with an increase in the number of transactions, house prices also climbed steadily in the third quarter of this year. According to Lightstone Property data, the nationwide average price of sectional titles for Q3 2021 is R1,056,417* which, when reviewed against the figures from previous RE/MAX National Housing Reports, is an increase of 9% YoY and 1% QoQ.

The RE/MAX National Housing Reports reflect that this is an increase of 3% since last quarter and of 16% since Q3 2020. 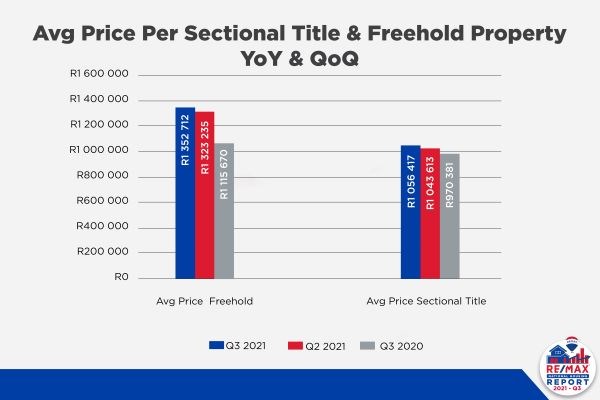 Sales priced between R800,000 and R1,5 million continue to account for the largest portion at 26.7%* of all transfers occurring in Q3 2021. Transfers between R400,000-R800,000 follow close behind this at 23.1%* of the total transfers. Following this figure were transfers priced below R400,000 which now account for 22.9%* of all transfers in Q3. Sales between R1,5 million to R3 million accounted for 20.1%* and those priced above R3 million accounted for 7.2%* of the total transfers this quarter, which is a healthy figure for this market segment.

The top five searched suburbs on remax.co.za were as follows:

According to Private Property, the median asking price per province for the third quarter of 2021 were as follows:

Figures according to Lighstone Property.

“While I am grateful to see the local housing market thriving as it is, I also do not expect that the market will remain this active forever. It is likely that demand will dampen as soon as the cycle of interest rate hikes starts. Until then, I would encourage buyers to make the most of the low interest rates and sellers should seize the opportunity to sell now while buyer demand is still high,” Goslett concludes.

Midrand now one of the highest growth areas for young buyers
Midrand is part of the bigger Gauteng property market. What time of prospects is Midrand offering now?
Untapped residential rental opportunities you need to know
South Africa’s residential rental market has gone through significant shifts over the years, with historically disadvantaged areas now offering new opportunities for rental agents.
Rode Report on the state of the SA property market for the third quarter
This report shows that the property market continued to recover in the third quarter of 2021 but warns of looming higher interest rates.
Browse the Advice Centre