Steyn City – a mixed use development like no other

Steyn City seemingly came out of nowhere. One day there were large swathes of open land near Dainfern, the next, there were massive peripheral fences, roads, a colossal gatehouse and numerous show houses. It was apparent from the outset that Steyn City would be a development to be reckoned with. The fact that it has cracked a spot on Gauteng’s multi-billion Rand ‘mega development’ list simply affirms this.

Construction of five mega mixed-use developments is currently underway across Gauteng. These include Zendai Modderfontein in Modderfontein, Waterfall Estate near Midrand, Hazeldean in Pretoria East and Menlyn Maine in Pretoria. Of these, Zendai Modderfontein is reported to be the most expensive with an estimated total price tag of R84bn. Waterfall Estate is set to cost R71bn, Steyn City weighs in at R45bn and Hazeldean and Menlyn Maine will cost R44bn and R10bn respectively.

Steyn City occupies approximately 2000 acres of land located between William Nicol Drive and Cedar Road. The development is the brainchild of Douw Steyn who came up with the idea when Giuseppe Plumari, a long-time friend and business associate purchased land in the area, initially with the intention of using it for industrial purposes. Steyn subsequently purchased pockets of surrounding land, much of which has already been transformed via phase one.

Three residential options are open to investors. These include apartments, clusters and freehold stands. One, two and three bedroom options are available at the “village style” apartment blocks which are largely characterised by contemporary, barn style architecture and which have been outfitted with high-end Miele appliances. The apartments range in size from 74sqm’s to 149sqm’s and are priced from R1, 65m up to R3, 9m.

The clusters are typically characterised by four bedroom units with an average floor size of 350sqm’s on stands measuring between 400 and 600sqm’s. Each cluster has its own garden and lies within walking distance of the estate’s Mandela Park and a deli. Two architectural styles are available to buyers in this segment.

Unsurprisingly most of the estate’s freehold stands occupy prime positions along parklands, a Jack Nicklaus designed 18 hole golf course or the Jukskei River which intersects the city. The stands range in size from 800sqm’s up to 4000sqm’s and range in price from R2, 3m to R17m. Buyers will be able to build their homes according to a range of architectural styles including contemporary, Thesen Island, barn house and sandstone clad French chateau.

Much of the focus of the city is being placed on creating a pedestrianised, park-like outpost without internal boundary walls. Indeed, according to the developers, a key consideration is to build a city which prioritises the free flow of people and enhances community living. To this end, a ring road has been constructed around the periphery from which kilometres of walkways and cycle tracks will feed into the estate and intersect the various specially designed sports, fitness and playground nodes.

Of course myriad recreational facilities and all manner of commercial amenities are being incorporated into the estate too. Specifically, a number of junior and senior schools, two shopping precincts, a business park, a medical centre, a retirement home and a private bus service will be built in phase two. Fishing, tennis courts, an equestrian centre, outdoor swimming pools, a clubhouse complete with state-of-the-art gym, a heliport and petrol station also form part of the mix. Every property will also have access to a next generation cable network. On completion, it is estimated that Steyn City will play host to approximately 10 000 residential properties. 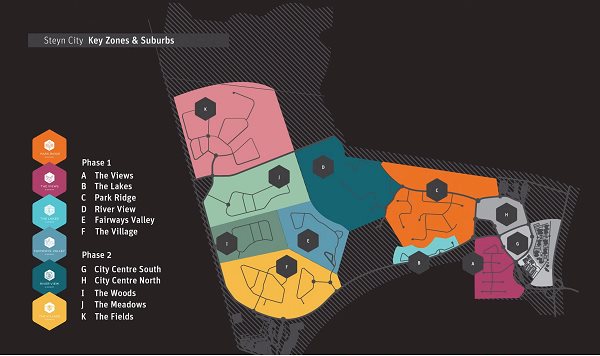 Pretoria Property: what to expect in 2016
Pretoria properties in suburbs neighbouring commercial developments and older houses on large properties are set to be in demand.
A R2 billion expansion is set to transform Cape Town’s CBD
Cape Town’s CBD will welcome 12 new developments, with a combined value of more than R2-billion. One of the new developments includes Zero2One, which on completion will be the tallest building in CPT.
Subdivision of property
Definitions, pros, and cons of subdividing your property.
Browse the Advice Centre