Activity with regard to new housing construction contracted at slower pace towards late 2009 compared with a year ago, but the sector continued to experience a fair amount of pressure. In terms of the volume of building plans approved for new housing, conditions deteriorated at a markedly slower pace, while the declining trend in new housing constructed appears to be at a lower turning point. The real value of building plans approved for new housing came to R16,31 billion in the first eleven months of 2009, which was 39,3% lower than the R26,88 billion recorded in the same period the preceding year. The real value in respect of new housing constructed was down by 26,5% year-on-year (y/y) to R16,77 billion in January to November last year (R22,80 billion in the corresponding period of 2008). All real values are calculated at constant 2005 prices. The total number of building plans approved for new housing was markedly down in all three segments in January to November 2009 compared with a year ago (see table below). The total number of plans approved for new housing was down by 19,9% y/y to 3 836 units in November last year (-28,3% y/y in October). The total number of new housing units completed declined by 22,7% y/y in the first eleven months of 2009, continued to be driven by the segments for houses larger than 80 m² and flats and townhouses. In November last year the number of new housing units completed was, at 3 997 units, 32,2% y/y lower than in November 2008 (-36% y/y in October last year). The number of lower-cost housing units constructed was almost unchanged in January to November from a year ago, with trends in the planning phase still indicating that the construction phase might be negatively affected in the short to medium term. Residential building activity remains extremely low compared with historical trends, despite some indications that the sector might be contacting at a slower pace. Significantly higher levels of activity on an annual basis are still not expected over the short term, taking account of prevailing housing demand and supply conditions. 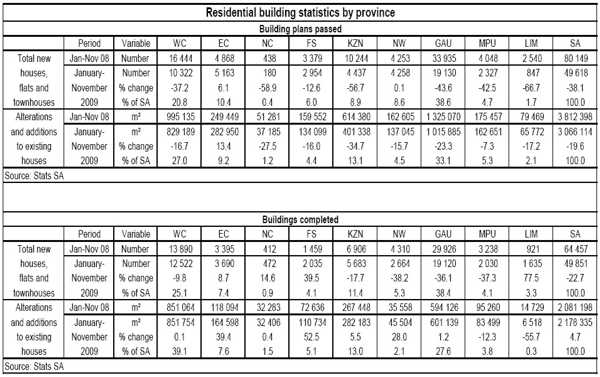 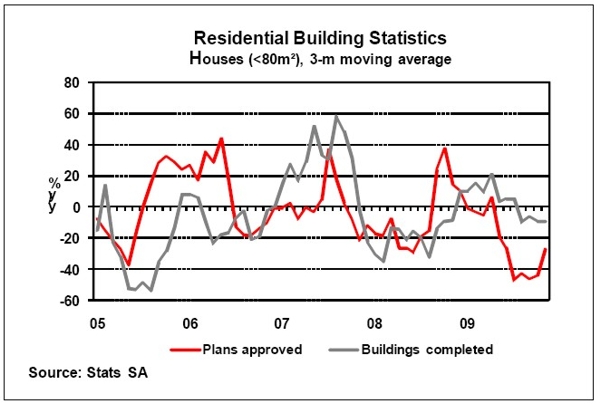 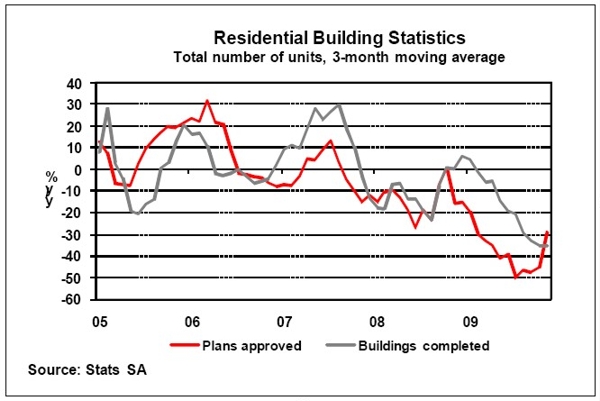 Add value to your home with the right choice of fireplace
Latest trends in fireplaces that will warm your home and add value to your property.
Tips for heating your home and saving money
Saving electricity makes excellent financial sense, and with winter coming up it pays to look at ways of warming your home that will save money in the process.
Safety and security tips for agents
Estate agents need to be alert and aware of the risks involved in showing properties and meeting new clients.
Gas installations – what homeowners need to know
All gas installations need certificates of compliance issued by certified installers.
Browse the Advice Centre