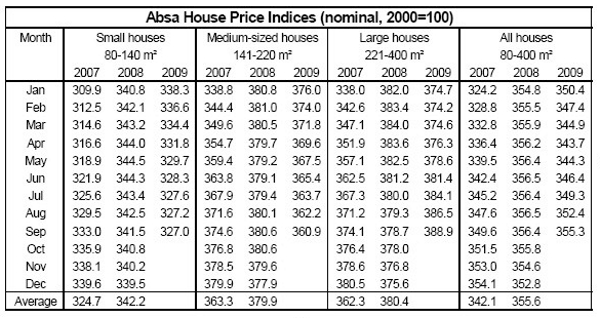 The residential property market is still experiencing tough times on the back of an economy that is in recession, which adversely impacts the household sector over a wide front. There are, however, indications that the worst may be over for the local economy and that a recovery is to commence towards the end of the year. House price trends appear to have turned the corner and with mortgage interest rates down by 500 basis points compared with late last year, as well as the recently selective relaxation of mortgage lending criteria by banks, property market conditions in general are expected to improve, but the process of recovery will most probably be slow and gradual. In view of nominal year-on-year house price deflation slowing down over the past few months, prices may start rising on an annual basis again in the near future if current trends are to continue. Based on these trends as well as nominal price deflation of 2,1% on average in the first nine months of 2009 compared with the same period in 2008, prices may record a decline of less than 2% for the full year. In real terms, house prices are forecast to decline by around 9% this year. In 2010, nominal price growth of between 2% and 3% is expected, with prices forecast to decline somewhat further in real terms next year based on projections for nominal house price growth and headline consumer price inflation. 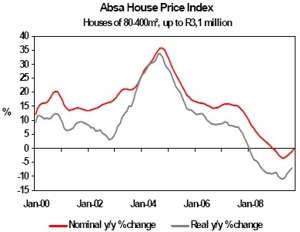 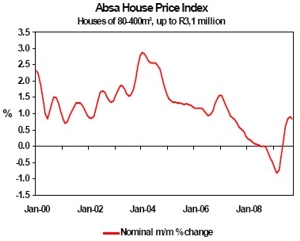 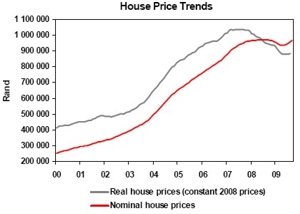 Explanatory notes: The Absa House Price Indices, available back to 1966, are based on the total purchase price of houses in the 80m² - 400m² size category, priced at R3,1 million or less in 2008 (including improvements), in respect of which mortgage loan applications were approved by Absa. Prices are smoothed in an attempt to exclude the distorting effect of seasonal factors and outliers in the data. As a result, the most recent index and price growth data may differ materially from previously published figures.