Once upon a time, Jozi’s north-western suburb of Auckland Park was a romantic, country getaway where men on horseback came to rest their weary heads after a long week in a makeshift mining camp up the road – now Joburg city. According to long-time resident and historian Katherine Love, back in the early 1900s this was country living in the city and many considered Auckland Park a delightful weekend hideout. “The miners would escape their stuffy, corrugated iron rooms or tents and head for the clean, fresh air in the leafy green region of Auckland Park. The whole area was originally a farm and the main farm house was where the Johannesburg Country Club is - now 1 Napier Road.” Love has lived in her charming home for the past 43 years. She runs daily tours in her 22-room treasure trove, “Linfield Victorian House Museum”, at number 72 Richmond Avenue, Auckland Park. Love and her late mother collected Victorian and Edwardian antiques, furniture, art and other décor items and her home is kitted out just as it would’ve been way back then in 1900. Dressed up like a Victorian parlour maid, Love will guide you through the music room (filled with beautiful old pianos, organs, a violin and a cello), dining rooms, a ladies drawing room, pantries, a bathroom, a library (wall to wall with exquisite old books) and a children’s wing with a bedroom, nurse’s room, playroom and children’s dining room. 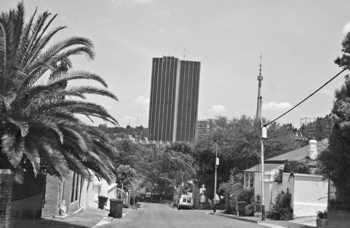 She says that property in Auckland Park was laid out in 1888 and developed by John Landau (a New Zealander) who likened the area to his home town Auckland, hence the name. Landau struck it lucky when he persuaded the farmer who owned the whole area to sell it to him – just one year before gold was discovered. “He laid out the farm area as a residential suburb and sold off stands that were each about half an acre. But, he struggled to get people to move into the area in the beginning because everyone thought of Auckland Park as the country – and they wanted to be in the city. So, Landau converted the farm house into a hotel, built a boating lake (which was later filled and is now the bowling club) and hoped it would encourage more and more people to see the suburb’s potential.” And eventually they did. These days Auckland Park is so urban that you have to dig (really) deep to find any trace of that old country charm amidst all the buzz and vibe. Love says that everything changed in the area in the late 1960s when the plans to build RAU (Rand Afrikaans University, now University of Johannesburg) and the SABC got under way. “That was major and many wonderful old homes were expropriated in the process.” But that said – if it wasn’t for these developments, what would Auckland Park look like today? Home to the SABC headquarters, Naspers and the University of Johannesburg – the region has attracted a creative, trendy, youthful resident. Over the years, many of SA’s finest artists, journos and musos have settled in Auckland Park and its surrounding suburbs like Melville and Braamfontein. With these major TV and radio studios on Henley Road, many production companies nearby, media houses and a host of fabulous restaurants and cultural hot spots in the vicinity, it’s a great place to live, work and play. Love says that the shopping centre, Campus Square, has added a new dimension to Auckland Park. “That’s the best place to shop and get a cup of tea nowadays.” Campus Square (corner Kingsway and Main Street) is home to a variety of shops, including Woolworths Food, Pick ‘n Pay and Clicks – plus some uber-trendy clothing stores such as Sowearto, Jay-Jays and Toxic Candy. Auckland Park also boasts one of the best foodie and coffee spots in Jozi: the chic 44th Stanley. Salvation Café is also popular. . Then it’s off to Bean There for the finest Fair Trade coffee around. According to best-selling author and motivational speaker Harvey Mackay (Swim with the sharks without being eaten alive), suburbs like Auckland Park are a win on the property barometer.

Quoted by estate agency Chas Everitt, Mackay suggests searching in up-and-coming suburbs where creative people are settling. “The pattern in urban revival is always the same: first come the artists - writers, painters, art directors and photographers – who are looking for cheap space for each other and for that certain cachet that their eyes can detect before ours can. “Then come the galleries and the restaurants, then the boutique advertising agencies and small architects, who want to give off an aura of artiness. Then come the yuppies. Then come the tourists. And with every new wave, property values go up. Until eventually, the artists who started it all get priced out of the market and have to go somewhere else.” Chas Everitt CEO Berry Everitt says such areas are also, of course, the haunts of career renovators – “those who not only love turning sad old homes into cheerful, desirable properties, but who also know how to make decent profits doing so”. He shares what novice buyers should be looking for in this kind of suburb: “Learn to spot the best prospects - homes with peeling paint, overgrown gardens and tatty roofs but sound structures. Look for a good “livable” floor plan. Look out for homes with shabby or outdated décor where the only changes needed may be cosmetic. If remodeling is necessary, try to contain it within the existing exterior walls. Make an offer to purchase immediately when you find a good renovation prospect, as they are not as plentiful as one might imagine.” According to Lightstone’s suburb report on property in Auckland Park, there’s been a hive of activity in the area and freehold properties especially have performed well despite the global economic crunch. Freehold property in Auckland Park makes up 80% of all market stock in the area and return on investment over the past five years has been solid. The average freehold property was valued at R880K in 2004 and at R1,48m in 2009. Deeds Office data reveals that over the past 12 months, 30 freehold properties and 12 sectional scheme properties changed hands in Auckland Park. The average freehold property price was R1,6m while the average sectional title scheme went for R660K. Properties in sectional title schemes dropped in average value over the past two years by about 13,5% - so do your homework before thinking about buying one of those.