The Midlands is the beauty-spot on the face of KwaZulu-Natal (KZN), adding that something special and unique to the province’s mix of seaside, bush and urban attractions. Snuggled between Pietermartizburg (PMB) and the Drakensberg is the famous stretch of arts, crafts, scrumptious foodie spots and some of the country’s loveliest land – also known as “The Midlands Meander”. The Meander refers to the 80km stretch of road from PMB past Midmar Dam and Lions River, through Lidgetton, past Balgowan, Nottingham Road and Mooi River where you’ll find potters, weavers, woodcrafters, fine artists, leather workers, metal workers, herb growers, cheese makers, beer brewers, country hotels and B&B’s. If you want a rest from the frenzy of modern-day life (minus the hoards of holidaymakers who vie for a spot in the KZN sun over Christmas and Easter), then do yourself a favor and book into any one of the charming establishments in this part of the world. We’re talking long walks in a serene setting, fishing, shopping at many of the exceptional arts, crafts and décor stores, playing a round of golf at Gowrie Farm Course, sipping gluvine or enjoying a Pickled Pig (the local ale) at one of the many cozy pubs. And then some lucky people get to live there too. 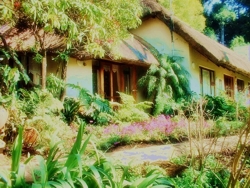 John and Linda Hall have called the Midlands home for 13 years now. They run the beautiful farm-style guesthouse Pleasant Places, which overlooks the spectacular Midlands countryside from Lidgetton West. Looking back, John says that the peace and quiet that characterizes this piece of paradise has been a real blessing in their lives. “We live amidst lush greenness, rolling hills, misty summer nights, clean air, sweet borehole water and low humidity, unlike our neighbors in PMB and Durban.” In 1997 John and Linda paid about R600K for their 40 acres of pure bliss. This includes: sprawling lawns, massive trees, a river, a dam, various outbuildings which they’ve transformed into their stunning B&B, and their delightful, large country house with incredible views. These days their property is worth about R6m – that’s a whopping 900% return on investment in just 13 years. The Halls also list the low crime rate and the absence of sirens and similar city squawks as a real bonus to living in the Midlands. Their only gripe is trying to navigate the muddy farm roads during the rainy season. Plus they have to make something of a great trek to get to any major amenities. For a real shopping experience, they head up to PMB, which is about a 30-40 minute drive away. That said, it’s a small trade-off considering they get to wake up to whistle of the weaver bird, snuggle up next to the fire in winter, own the road (never having to contend with traffic) or spend Sunday afternoons catching trout in the neighboring dam. The “Midlands Meander” is also famous for its numerous top-drawer restaurants. When Linda isn’t whipping up the scrumptious, home-made meals that they feed their guests at Pleasant Places, the Halls head down the drag to the Cooking Bear, Granny Mouse’s Country House or Lythwood Lodge for an evening of fabulous wining and dining. Piggly Wiggly Coffee Shop is the perfect lunch-time spot, especially if you are just passing through. 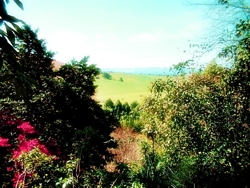 Grab an award-winning cappuccino, nosh on a fresh farm-ranch salad and enjoy the relaxed, pretty setting. There’s a lovely farm stall on the premises and other great artsy-type stores too. Trayci Tompkins, a well-known local potter and her team have developed a ceramic range that celebrates South Africa’s rich and diverse culture. Her famous Dlamini family of figurines are just some of the handmade clay "collectables" that you can get there. Remax Midlands has been in the area since the 1980s. They have offices in PMB, Hilton and Howick. Pelham Henwood is the owner and broker of Remax Midlands. Henwood has watched the Midlands grow and flourish over the years. “The Midlands was predominantly a farming community in the early days. While farming is still the life-blood, the area has become very popular as a retirement destination and a getaway place. Small holdings and lifestyle homes are also very popular.” According to Henwood, a family property in the KZN Midlands goes for between R900K and R1,3m depending on the location. This generally consists of three bedrooms, a lounge, dining room, family room, pool and double garage. Henwood says the Midlands offers a very attractive lifestyle. “We are situated conveniently to both the coast and the mountains. The area is also famous for its quality schools and the university.” Top schools in the area include Hilton College, Maritzburg College, Michaelhouse, The Wykham Collegiate, St Johns School for Girls, St Anne’s Girls School, Epworth, Pietermaritzburg Girls High and St Charles College. Junior schools include Merchiston, Cordwalles and Cowan House, to list a few. The tertiary institutions include Maritzburg Varsity College, the University of KZN (PMB) and various technikons. “There are also attractive shopping malls in PMB like Liberty Midlands Mall. Then there are major, annual sporting activities like the Comrades Marathon and the Duzi Canoe Marathon which happen in the region. “On the cultural side, the Royal Agricultural Show, the annual Art in the Park exhibition and the Hilton College Arts Festival in September are just a few examples of what’s on offer. Henwood says that the Midlands Meander has become a thriving economy in its own right. According to the Midlands Meander website it was during the 70's that artists and crafters moved into the area in droves. During the 80's they combined creative forces and started the Rolling Exhibition which has since developed into a bustling route and hive of industry and activity. From Pietermaritzburg to Camperdown, and from Greytown to Ixopo, Henwood says that the effect of the global credit crunch was felt in 2009. “Prices of property in the KZN Midlands have stabilized at about 20% of their peak and we expect a gradual improvement through 2010. This turnaround will be stimulated by the lower interest rate regime and improved consumer confidence.” Henwood says investors are reappearing in the market. “Two-bedroom apartments remain the most popular target and generally speaking offer the most attractive return on investment. Currently, net returns of 6% - 8% can be achieved.” Henwood encourages more investors to seriously look into the Midlands. “Property in the KZN Midlands has a great deal going for it. The local economy has not been as severely affected as the larger metropolitan areas. The influx of civil servants over the past two years has underpinned the demand for property, especially in the rental sector. Vacancies are minimal provided the required rental falls within the popular band of affordability which is currently under R5 000 a month. Also popular are free-standing homes on the periphery of the PMB CBD which, with re-zoning, can be converted to commercial use. These properties often require refurbishment but the exercise is well worth it since medium-term returns are very attractive.”

5 Vital Home Tasks You Shouldn’t Try to Do Yourself
Although DIY is a great way to save money, there are some household tasks that you should never do yourself.
How to negotiate annual levy increases
Top tips on how to make sure that your yearly levy increase isn't too high through the process of negotiation.
Buying or selling? Why you should be on your estate agent’s “hotlist”
How to become your real estate agent's priority client.
Landlords, mitigate your risks in this economy, says Seeff
How landlords can reduce their chances of losses in the current economy.
Browse the Advice Centre