Imagine for a moment that you live in a trendy multicultural suburb just outside one of the hippest cities in the world. Your neighbour to the left is an academic from northern Africa, to your right is a mixed-race couple and opposite you is a so-called Coloured family, whose house has been passed down three generations. On sunny Saturday mornings, you roll out of bed and stroll down to the deli for the papers and a pastry. The place is humming with tourists who are staying at the backpackers lodge nearby. En route home you catch up with your neighbours and buy some snoek from a Hout Bay fisherman who sells from a horse-drawn cart. At lunch time you nip down to the Old Biscuit Mill in Albert Road to pick up your weekly supply of organic produce, and that evening you hook up with friends at Jou Ma Se Comedy Club at the Albert Hall just down the drag. This is cosmopolitan city life at its best! This is Woodstock. Of course, it hasn’t always been this way. Once dicey and dirty, Woodstock was considered only slightly better than its unsavoury neighbour, Salt River (the site of a public lynching in 1996 when vigilantes killed a notorious gangster whose home was a known drug den). But thankfully that dodgy image seems to be a thing of the past. For these days, every investor and his cousin is clamouring for a piece of property in Woodstock. Thanks to developments such as the swanky (mixed-use) Upper East Side, The Boulevard, The District, Buchanan Square and Newmarket Junction, Woodstock is “rising from the ashes” as some have said. In fairness, it is still true to say that there is Woodstock and there is Woodstock. As a rule, the higher up you are, the better. Lower Woodstock, which is below Main Road, borders on Salt River, and Salt River is still not a good residential area. Upper Woodstock, which is above Main Road and below Eastern Boulevard, borders on the upmarket University Estate. Unless you’re in one of the swish new sectional title developments, you want to stick to Upper Woodstock. 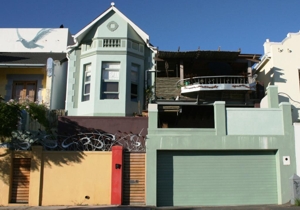 Angelique van Niekerk bought her property in Upper Woodstock in 2001. The house is a one-and-a-half bedroom semi on 163 square metres (including a small garden), though it doesn’t have parking. She paid R200 000 for the house, which she estimates is now worth R950k. Angelique plans to sell her place and upgrade to something bigger in Woodstock. The 40-year-old entrepreneur sees herself working from home in the future and is keen on a different configuration. Angelique’s house has been on the market for a month and in that time she’s been looking for her dream home. “I’ve seen some fantastic properties. There’s amazing stuff in Woodstock. It has had a facelift of note since I bought. Woodstock has gone from scummy to yuppie. Places that looked like dog kennels are now spiffed-up semis. “I really like the buzz in Woodstock and it’s very convenient. You’re right on the highway; it’s quick to nip to Atlantic Seaboard or the Southern suburbs, or even to the West Coast. You’re very well located here. That’s the single biggest plus.” Among Angelique’s favourite new haunts in Woodstock are Superette, a new coffee shop on Albert Road, and the recently renovated Bromwell Hotel (complete with doorman donning a top hat), which is now home to a patisserie, gallery and decor shop. “Those of us who bought in Woodstock years ago saw its potential. We knew it would happen.” Those early buyers are community-hearted folk who have worked hard – as members of the Woodstock Residents Association – to create a “harmonious, safe, child-friendly, clean, green community”. Sadly, as the suburb becomes more affluent, Angelique says that buyers are building big walls around their properties and themselves – and are less inclined to engage with or embrace their communities. Another Woodstock veteran and expert in the local property scene is estate agent Hannes Potgieter. Hannes has lived there for the past 26 years and owned property in Woodstock for 15 years. “I love it. I came from Joburg and Woodstock was my introduction to Cape Town. I left a couple of times, but couldn’t stay away. “Woodstock really captures the essence of Cape Town: that of a vibrant community. And it’s a place where kids still play in the street. It’s integrated, there’s a great community spirit and when the south-easter howls, you really feel it. I love it.” Hannes says that Woodstock attracts mostly young professionals who can’t afford to buy in the city or in Observatory. He says the average asking price for a two-bed cottage without parking is about R850 000. At the moment Rose Eedes Properties has houses for sale from R850 000 to R2.8m in Woodstock. According to Deeds Office data supplied by Lightstone, the average selling price of a freehold property in Woodstock this year has been R790k and the average selling price of a sectional title property has been R470k. Over the past three months 24 properties in Woodstock have changed ownership. The most sales were in the R400k to R800k band, fetching an average price of R634k. Apart from affordability and proximity to the city and major roads, Hannes says Woodstock has much to offer, including restaurants (Don Pedro, Chandani, Frangipani’s, Jamaican Me Crazy), schools and a growing number of businesses, from computer technicians, accountants and estate agents to beauty salons and coffee shops. Woodstock residents are very proud of the suburb’s heritage and of the Woodstock Aesthetics Advisory Committee which helps preserve historical buildings. Woodstock’s full of gorgeous old Victorians semis and other old homes which help attract a certain type of buyer. Hilton and Carla Swanson bought their two-bedroom semi in Roodebloem Road in July 2004 for R525k. The house, which is less than 100 square metres, had been fully restored by a developer. Furthermore, it has a garden and parking – which is a big plus in Woodstock. The couple reckon the house is now worth at least R1m. “The developer had five houses and three flats, which all sold on the first show day. At the time, it wasn’t unusual to arrive at a show house along with 20 other people. Fourteen would put in offers, which would result in people trying to outbid each other.” The Swansons have invested in and enjoyed their home, as well as the suburb. “In Woodstock everyone knows everyone and you can walk to the bank in Main Road and to the fish market or the bakery.” The rental market in the suburb is strong, says Hannes. As a rule of thumb, you can bank on bagging about R2500 for every bedroom in the house. And if your home has parking or an extra bathroom, you can command a higher rental. A one-bedroom, one-bathroom apartment (from 46sqm) in Upper East Side will cost you anything from R4500 a month to rent (including parking and 24-hour security).