“You can make friends very easily in Empangeni. It’s a small town and the people are friendly. But you can’t have an affair here. Everybody would know”. That’s how Linda Vivian, who has lived in the small sugar farming town for 28 years, describes Empangeni. Encyclopedia Britannica describes Empangeni as a settlement that can be traced back to 1851, when the Norwegian Missionary Society established a station in the valley of a stream named for the large number of mpange (hard pear) trees. It is a junction on the main railway line from Durban to Swaziland and has an airfield. The Enseleni Nature Reserve, an area with a rich vegetation of wild figs, papyrus, and mangroves, is 14 km east of Empangeni. The population in 2001 was 13 310. 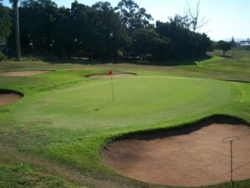 Vivian has run an independent estate agency in Empangeni for the past 17 years. She and her husband live in Nyala Park, an established, well-to-do area near St Catherine’s Convent and the golf course. “We go running every morning and it’s so beautiful here. The views are lovely.” If only the property market were as good as the scenery. Vivian is rated by her peers as a good agent and she says 2009 has been a terrible year and she has had only three sales to date. “It’s the worst market since I started in 1992. It’s a mission to get finance from the banks and the same deals seem to go round in a circle.” Vivian says the market is affected by the recession. A well-known employment agency in Empangeni was recently forced to downscale and move from the premises it has occupied for years, she says. Historically Empangeni has thrived because of surrounding sugar cane farms and the mills in Empangeni and Felixton. It also benefited from the growth in Richards Bay, but the pace of development in the port town has outstripped Empangeni. Johan Van Vuuren is the Gilbert Estate Agent franchise holder in Empangeni. He says the market is slowly picking up although prices are below those achieved in nearby Richards Bay. “The average price for a three-bedroom, two-bathroom house is between R650 000 and R950 000. There are not many houses in Empangeni that are priced over R900 000. The bigger, fancier ones would probably sell for around R1,4 million.” Van Vuuren says Empangeni is an important regional centre, has many schools (including St Catherine’s and Empangeni High School which consistently achieve good matric results). The town also has two big hospitals, one private and one state, and houses many government offices. Empangeni has a shopping centre with a Woolworths and serves as home to many people working at the port and the bigger factories like Bell Equipment, Mondi and the aluminum smelters in Richards Bay. Van Vuuren says the growth of Richards Bay (a 15-minute drive away) has affected Empangeni. Shopping facilities in Richards Bay are now fancier and this is hurting retailers in Empangeni. “Empangeni is green and pretty. Everything is accessible. It takes you about 10 minutes to drive from one side of town to the other. It’s a working class town and the market has been driven a lot by government employees. But because of the recession people can’t afford the deposits required to buy, so they are renting.” Van Vuuren says to rent a three-bedroom house in Empangeni will cost you between R4500 and R6000. According to property experts Lightstone, most of the buyers in Empangeni (45-48%) are aged between 50-64 years. Most of the stock sold in the last year (90%) was priced between R400k-R800k. Vivian says the slow, country atmosphere suits most Empangeni residents. It’s also hellish hot in summer so you have to be prepared for that if you plan to move to Empangeni. She says good houses with well-kept gardens and swimming pools in nice areas in Empangeni can be bought for just upwards of R1 million. Sports clubs are big in Empangeni, probably because there aren’t too many restaurants. Vivian says there are no cinemas in Empangeni and generally not too much night life. So, if you want to get bang for your buck, aren’t too hung up on dancing and don’t need to have an affair, Empangeni could be the place for you.

Don’t be deterred by rate increases
Interest rates have just gone up but this should not deter home buyers from entering the market.
Property market braced for steeper interest rate climb
The business market in South Africa is currently coming to terms with the increase in interest rate. What has been the reaction?
Choosing the right ceiling product for your home
Ceilings can be implemented and maintained efficiently and cost effectively by considering these new materials on the market.
Prepaid water meters – an excellent option for sectional title schemes
You can keep control of water usage in sectional title complexes by installing prepaid water meters.
Browse the Advice Centre