The FNB Building Confidence Index (FNB BCI) measures the business confidence of all the major role players and suppliers involved in the building industry including architects, quantity surveyors, contractors, sub-contractors and retail merchants and manufacturers of building materials. The index is compiled quarterly from the building, manufacturing, and retail opinion surveys undertaken by the Bureau for Economic Research (BER) at Stellenbosch University. The BER business survey in the building industry was conducted between February 1 and March 1, 2010. The index increased moderately from an index value of 28 in 4Q2009 to 30 in 1Q2010. Of the six sub-components of the FNB BCI, 4 registered a rise, in one case no change was recorded, whilst a decline in one sub index occurred during 1Q2010. Compared to 4Q2009, the following improvements in confidence levels took place namely, building contractors (+2), sub-contractors (+7), architects (+16), and retailers of building materials (+2). In the case of manufacturers of building materials, confidence levels remained level pegged, whereas the confidence levels of quantity surveyors dropped relatively sharply (-16) during 1Q2010. FNB Chief Economist Cees Bruggemans says that the results indicate that the upswing in the residential sector is slowly getting under way. However, the tempo of the revival is currently constrained by factors such as uncertainty about economic prospects, high levels of consumer debt and comparatively still tight lending standards, which although less restrictive than a year ago, nevertheless still disqualify some willing marginal borrowers. In the case of the non-residential sector, business conditions remain unfavourable reflecting the lagged response to the relatively sharp drop in domestic demand during late 2008/first half of 2009 in the overall South African economy. On the positive side, the fact that the confidence of architects has risen notably during 1Q2010 confirms anecdotal evidence that some property developers are again dusting off plans and are considering new projects. These are, however, only likely to come to fruition in 6-9 months and will therefore do little to stimulate the non-residential sector in the immediate future. 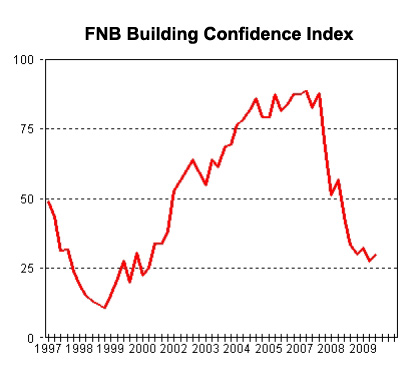 According to Bruggemans the business confidence of residential contractors increased marginally from a 21 4Q2009 to 26 in 1Q2010. Nevertheless, this was the fourth consecutive quarterly rise in confidence levels indicating that the deep recession in the residential sector is now something of the past. He noted that although residential building activity levels remains below that of a year ago, the situation has taken a turn for the better. This is also reflected by reports from respondents indicating that tendering competition for new work has eased during 1Q2010. Margins consequently recovered somewhat, resulting in a recovery in the overall profitability of survey respondents. Employment growth remains absent indicating some productivity gains at present seen against the background of the recovery in building activity reported in the sector. Turning to short-term prospects for the residential sector, he indicated that contractors expect business conditions and the growth in building activity to show a further improvement in 2Q2010. John Loos FNB Property Strategist announced that the business confidence of non-residential building contractors dropped from an index value of 30 in 4Q2009 to 26 in 1Q2010. The latter compares with an index value of 51 in the corresponding quarter a year ago. Loos said that the growth in building activity notably underperformed expectations during 1Q2010. A net 89% of the respondents to the BER survey indicated that they regard the insufficient demand for building work as a major constraint affecting the viability of their businesses. Tendering competition remains tight, thereby putting downward pressure on margins and consequently the growth in the profitability of businesses that participated in the survey. He observed that the survey results are in line with official data releases such as building plans passed and completed which indicate that non-residential building activity is under pressure. Retail space appears to be adequately supplied, whilst rising vacancy levels in the office sector caps new developments in this segment of the market notwithstanding the moderation in building costs. The present weak state of a number of sectors in the manufacturing sector is constraining the effective demand for industrial building, and vacancy rates in the industrial and warehouse property sector have been rising steadily too. In conclusion, Loos said that he believes that non-residential building activity could, at earliest, show some recovery during the course of 2011, provided that the global and local return to positive economic growth proves to be sustainable.