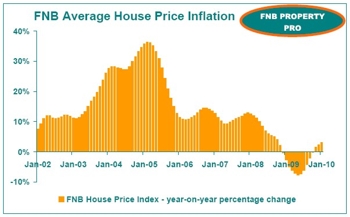 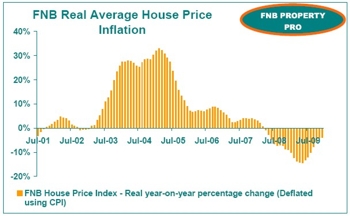 Still weaker coastal holiday towns point to essential buying being king in the current recovery__ An examination of Deeds data, for transactions by individuals in areas deemed to be residential-dominant, appears supportive of the view that the household sector is generally not yet on a firm financial footing, and is thus primarily focused on essential property buying as opposed to luxury buying. 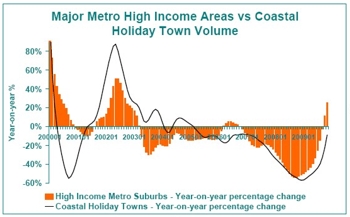 The essential buying focus hampers the pace of recovery in areas such as coastal holiday towns, where a far greater percentage of residential buying is typically for non-essential holiday purposes. Using a smoothed time series of the volume of transactions by individuals in residential dominant areas, we see our sample of high income areas in the 6 major metros (average price R1.154m) showing year-on-year volume growth of +25.9% by November 2009. This is not an impressive number yet, as it is admittedly off a very low base. But it far outstrips the volumes calculated for our sample of coastal holiday towns (average price R1.054m), which still showed year-on-year volume decline of -8.7% in November (although admittedly also slowly turning the corner). We use the “high income” areas of metros as a comparison with our coastal holiday town index because they are very comparable in terms of average price level.

The apparent result of the slower recovery (or stabilisation at least) in the coastal holiday town market is that the coastal holiday town average price inflation index remains on a declining path, showing year-on- year price deflation of -0.8% for the final quarter of 2009. This is in contrast to the +0.8% year-on-year increase in the High Income Metro Area Price Index. Although there is little difference in the inflation/deflation rates of the 2 indices, the High Income Metro Area Index is already on an improving trend, and so the gap between the two could probably be expected to widen in the near term. 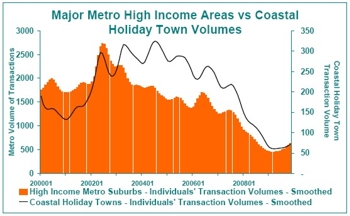 These graphs show the more extreme “cyclicality” of coastal holiday towns, as opposed to the major metro areas, with the coastal holiday areas having done far better at the peak of the residential boom, but in more recent times sliding to greater depths. Data source for this section: Deeds Office Conclusion January was the third successive month of year-on-year increase in house prices after almost a year of decline. This reflects a modest start to 2010, but more importantly an improving trend. Little changes in our expectation that price inflation won’t go further than single-digits, with a household sector still under significant financial pressure, and the belief that interest rates are at or near to the bottom. The SARB Governor did hint at the possibility of interest rate reduction in the not too distant future, but given the “downward stickiness” of consumer price inflation, even were further reduction to happen it would be unlikely to be substantial. The consumer price inflation rate actually rose from 5.8% year-on-year to 6.3% in December, and even though it is expected to return to the 3%-6% target range, both the SARB and ourselves expect it to hug the upper end of the target band, limiting the scope for further interest rate cutting. Nevertheless, the strengthening in the market is expected to continue until around mid-2010 at least, with the full impact of last year’s interest rate cuts still to feed through, and supported by a moderately strengthening economy. It is, however, a mild recovery where primary residential buying is the dominant focus, a view that is supported by the above indices which report a stronger high income metro market compared with coastal holiday markets. In addition, the FNB Residential Property Barometer for the 4th quarter, released last week, continued to show little sign of buy-to-let buying increasing in importance relative to the overall market.

Autumn interior design 2021
Every year, there are interior design trends that become the go-to decor style for many people who wish to make their homes warm and inviting during the colder months.
Decorating your holiday rental
It's important to furnish and decorate your holiday home in a way that will attract people of different aesthetic requirements across different demographics.
How to choose the perfect lighting for your home in autumn
It’s possible to still have a bright home that is cosy and comfortable even if your home gets way less sunlight in autumn.
A Homeowner's Guide to Geyser Maintenance
Home mantainance involves caring for important components such as a geyser. How should this be done?
Browse the Advice Centre