After an average decline of -3.9% for 2009 as a whole, the FNB House Price Index heads for 2010 on a rising trend. The FNB House Price Index average for 2009 showed a decline of -3.9% compared with the average value for the previous year. This was significantly worse than the +6.9% inflation of 2008, and a far cry from the +29.5% average price inflation registered in 2004, which proved to be the best year of last decade. However, while pointing to a dismal 2009 as a whole, on a monthly basis the index pointed to steadily improving times as the year drew to a close. December 2009 saw the 2nd consecutive month of year-on-year (December 2009 price level compared to December 2008) price inflation to the tune of +2.7%, an improvement on November’s revised inflation figure of +1.4%. 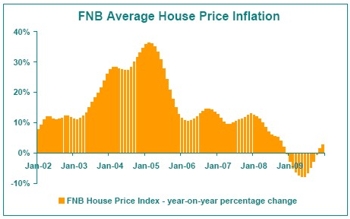 On a cumulative basis, the index is 195.4% higher than the July 2000 level, the point at which the FNB House Price Index started at a level of 100. The average house value for the month of December was measured at R772,974. 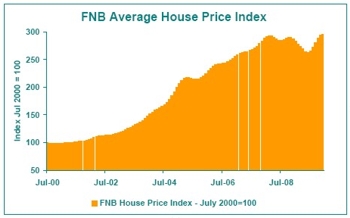 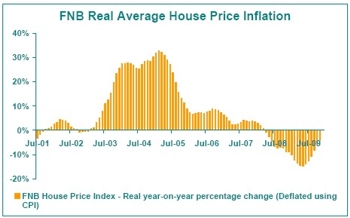 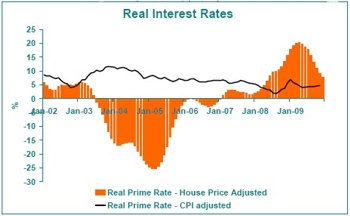 The consumer price-related real prime rate, however, is arguably less relevant to the residential property market’s performance than the 2nd measure, where house price levels are used to adjust prime rate into a real prime rate. This measure is important because there is a group of potential property investors who will compare the prevailing cost of credit with current capital growth on housing in order to estimate their potential returns. Some, who may arguably be labelled as “speculators”, seek to realise short term profit in times when the cost of borrowing money is less than the short term gains that one can make through owning and selling property. Around 2004/2005, a sharply negative real prime rate (according to this measure) made such speculation a very popular pastime. In December 2009, this 2nd measure of real prime rate declined further from 9.1% in November to 7.8%, but this rate remains very high by comparison to the property boom years, and could hardly be seen as creating a speculator-friendly environment. Primary residential demand and long term investment demand should thus for the time being be the overwhelmingly dominant drivers of property demand. Outlook and forecast – cautious optimism in 2010 December was the second month of year-on-year increase in house prices after almost a year of decline. The trend bodes well for a better 2010, after the market hit “rock bottom” in the first half of 2009 and thereafter began to show improvement. The economy has started to emerge from recession, which should provide some mild additional support to residential property demand, and the full positive impact of last year’s 5 percentage points’ worth of interest rate cuts probably still needs to feed through into the market at least for the first half of 2010. As such, it is realistic to expect a significantly better residential property price performance for 2010 as a whole. 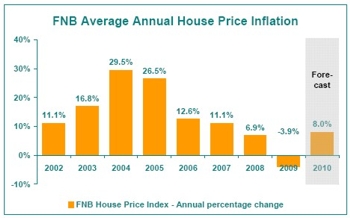 Therefore, an average price inflation rate of 8% is forecast for 2010 as a whole. This expectation is a significant improvement on 2009, but remains a moderate one compared with the boom years. The reasoning behind this “cautious optimism” is that there are still some key constraining factors on the market. For one, the domestic household debt-to-disposable income ratio remains high, restricting the rate at which the household sector can grow its new borrowing for the time being. A downward trend in the debt ratio has started, but it could be a few years before we reach the kind of low level needed to fuel a more impressive property boom. Secondly, the world economy is not without its issues, including high debt ratios in the USA, the world’s biggest economy, and major imbalances which involve some countries spending too much and others “over-saving”. In addition, it is questionable as to whether those who have implemented fiscal and monetary stimulus packages, aimed at ending the recent financial and economic crisis, are capable of standing strong when the withdrawal of such stimulus packages takes place. An expectation of 2-2.5% real economic growth in SA in 2010 is the result, and while this is more positive for property than the recession of 2008/09, it is not the 5%+ of a few years ago. And what of the World Cup and its impact? Absolutely fantastic for South Africa and its economy in the longer term I believe, and thus ultimately positive for property performance. It has already sped up much needed transport infrastructure delivery, and will do wonders in terms of marketing not only the country’s infrastructure, but also its organisational capabilities which I believe are grossly under-rated. In the longer term, such positive marketing should entice more entities to want to do business with or in the country, or to come as tourists, which is positive for economic growth in the long term. A stronger economy normally means a stronger property market. BUT, that is the bigger and longer term picture. With regard to the “direct” impact on property, in terms of football visitors directly boosting property’s performance by either buying or renting it during and around World Cup time, I believe the impact is set to be limited. Certainly, for a few months of this year there will be some property owners benefiting financially from letting their properties to football visitors at inflated rentals. But once the World Cup has come and gone, one would expect “normal” rental demand to resume and “normal” South African rental rates on such properties. With regard to football visitors’ propensity to buy up SA property, I suspect that some claims in this regard are over-optimistic. If the World Cup had taken place in SA back in 2006, when property was an extremely popular asset class world-wide, perhaps one may have had a greater amount of impulsive buying by football visitors. But global recession has meant that property is not the popular asset class of a few years ago, and greed has turned to fear in many countries as jobs and incomes have come under pressure, eliciting a more cautious investor stance. No doubt we will hear some stories of foreigners who saw a property they loved and impulsively bought it at a high price, but I do not believe that they will do this in numbers large enough to noticeably influence the average prices of the 5-6 million homes that make up the formal residential property market. Rather, the 2009/2010 recovery is likely to continue to be overwhelmingly driven simply by locals looking for a place to live, while the far smaller buy-to-let and holiday markets are likely to remain dominated by local citizens (Atlantic Seaboard and a few other areas aside).