Value of new residential loans granted nearing positive year-on-year growth After a lengthy spell of non-stop year-on-year decline spanning beck to June 2007, the =month that the National Credit Act was implemented, the value of new residential mortgage loans granted is steadily nearing a return to positive year-on-year growth. In September 2009, the rate of year-on-year decline had been reduced to -13.8%, and while this still appears to be significant decline, it is significantly better than the -27.5% just one month before, and hugely better than the -62.2% rate of decline as recently as April. On a month-on-month basis, broad growth has been in progress since early-2009. For the 3rd quarter as a whole, the year-on-year decline was -22.2%, which had more than halved on the -49.6% of the previous quarter, while the quarter-on-quarter growth rate had grown at an impressive rate of +30.3%. 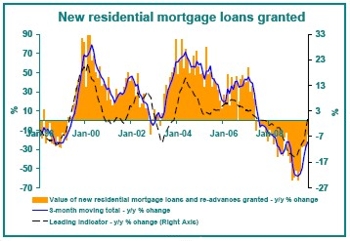 The SARB numbers are beginning to show more concrete confirmation of the increased volumes that we have been feeling since earlier in the year, with September’s R18,8 bn being the highest value of residential grants this year, and more than double that of January. While improving, though, the value remains less than half of the all-time high of R39.5bn reached in May 2007. The noticeable improvement in value of loans granted since the beginning of the year reflects the positive impact of 5 percentage points’ worth of interest rate cuts since late-2008, banks responding to better environment with some relaxation in lending criteria, and a mildly improving economic growth performance. 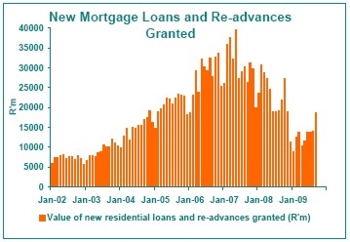 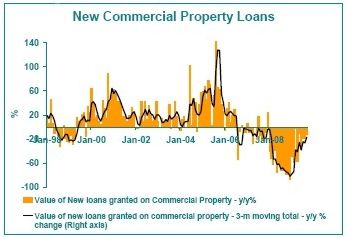 In recent years, the trend in commercial property loans granted has also taken on a similar shape over the past two years or so, having shown negative growth since earlier back in 2006, reaching an extreme rate of year-on-year of -86.9% in December 2008. Much of this weakness may reflect residential development finance, but the commercial property sector has probably also played a major role, with the returns of the major 3 sub-sectors of commercial property, namely retail, industrial and office space all showing significant deteriorations in performance from 2008, as the recession started to bite. Since the beginning of 2009, however, the year-on-year rate of decline for commercial loans granted has diminished steadily to a mere -11.6% in September, while over the third quarter its quarter-on-quarter growth rate had turned slightly positive to the tune of +5.4%. The focus of growth has been mainly on loans on existing properties, with the numbers still reflecting tough times for new developments 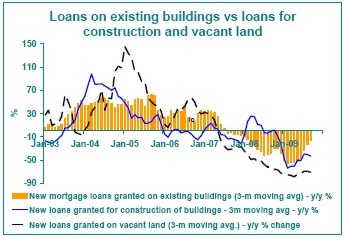 Breaking new loans granted up in a different fashion, the severe weakness in the new development market, compared to the existing property market, is apparent. The breakdown of new mortgages by loans on existing buildings, on construction of buildings, and on vacant land, lumps residential and commercial property together. (although residential property is the dominant segment in the mortgage market). Whereas the year-on-year decline in the value of mortgage loans granted on existing buildings has diminished steadily from a low of -56.9% in February 2009 to -17.2% as at September, loans granted for construction of new buildings showed a more extreme -43.4% decline as at September, while vacant land mortgage grants were -71.3% down year-on-year. The weaker state of loans on construction and vacant land confirms the lagging status of the new building market, versus that of the existing market. On the residential side at least, this has much to do with a combination of a weak “existing property” market and a surge in input cost inflation for builders in 2007 and 2008, which opened up a wider gap between new and existing home prices, making it difficult to bring competitively priced new stock to the market. Capital repayments growth has overtaken payouts growth, which could send total Mortgage loans outstanding into negative growth soon 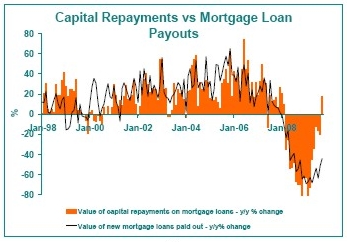 A noticeable feature of the mortgage market as of late has been the steady recovery in capital repayments, which showed positive year-on-year growth in value in September to the tune of 17.9%, possibly a partial reflection of a more cautious household sector determined to reduce its level of indebtedness in many instances (given that household borrowing for residential purposes is the dominant force in the mortgage market). This is in sharp contrast to mortgage payout value growth, which was still in sharp year-on-year decline at -44.2% as at September (although starting to turn for the better slowly). The large difference in growth rates between capital repayments and payouts has meant that the value of capital repayments has been catching up to that of payouts. The bygone years of booming growth in new lending had seen the value of capital repayments as a percentage of payouts declining from a 99.7% in March 1999 all the way to 37.9% by November 2008 (although by 2008 the low percentage was more a reflection of financial stress than booming new lending) This percentage has rebounded sharply in 2009 to record 92.4% at September 2009. The combination of negative growth in payout value and positive growth in capital repayments translates into ongoing decline in year-on-year growth in the value of total mortgage advances outstanding, registering a meagre 3.6% in October and looking increasingly likely to head into negative territory within the next few months. Such is the typical lag between new lending turnarounds and trend changes in growth in the value of outstanding mortgages, the latter being dependent on the relative performances of payouts vs capital repayments.

Outlook The steady rise in new residential mortgage loans granted is expected to continue until at least mid-2010, where-after one may see some flattening out in the level as the positive impact of the 2009 interest rate cuts wears off. This rise in grants is starting to spill over into an improving payouts situation with something of a lag. Noticeable increase in building loans is only anticipated in the second half of 2010, once the decline in oversupply of existing properties on the market makes new developments viable on a larger scale. However, in a generally more conservative environment compared with a few years ago, capital repayments growth looks set to outstrip new loan growth for a while, and this is expected to translate into a decline in total value of outstanding mortgage loans over the year of 2010, to the tune of around -5% year-on-year at next year’s end.