Are “tight” bank credit criteria appropriate? Perhaps more so than some would think, with the household sector’s vulnerability remaining highHousehold sector credit numbers for the month of May showed no improvement in growth from the previous month, remaining unchanged year-on-year at 3.8%. Such a slow pace of credit growth often gives rise to calls on banks, especially in credit-driven industries such as the property sector, to relax lending criteria further to facilitate stronger borrowing growth, which simplistically viewed would be the way to get the residential property market “back on track” (at least for a while). However, such views would be just that – simplistic, and lending institutions currently have a lot to think about, or should have at least. The reality is that recent household sector data point to an environment that can still be termed “high risk”, and this is probably no time for “heroes”. We could probably learn some valuable lessons from the recent US financial crisis. When the United States Federal Reserve cut its Fed Funds Target rate to 1% in its previous interest rate down-cycle, starting from around the 2001 US recession, it managed to breathe life back into an ailing economy, reportedly aided by more cheap money also flowing in from high-savings eastern economies to buy up debt instruments of dubious quality. However, the Fed had not reduced the many risks to the US economy that come from having high indebtedness levels. To the contrary, relaxed monetary policy and lending criteria helped already-high debt levels still higher, setting the country up for the ultimate crisis at a future stage when interest rates once again rose (as they always ultimately do), and an external shock in the form of the 2008 commodity price spike hit the economy. Their residential property market took a hammering, and the greatest financial crisis since the Great Depression took place. In South Africa, we managed to avoid a financial crisis, but our own household sector’s indebtedness level remains far from healthy. This is despite insolvencies being on the decline, home loans banks arrears situations having improved, property demand being higher than a year and a half ago, and both the economy and household disposable income once again growing positively in real terms. Despite such abovementioned improvements, the recovery to date can be classified as a “high risk” one, and important is not to fall into the US trap and bluff oneself into believing that all is well. Rather, one should examine the reasons for any improvements in household credit quality. The reality is that the main driver of this improvement has been a reduction of interest rates to a new low last seen a few decades ago, and NOT through a major improvement in terms of a reduction in indebtedness. The latter is what the country needs more of, because as quickly as interest rates can decline, so they can and will rise again at some stage in future, and if they were to unexpectedly rise in the near term, the still-high level of household sector indebtedness (by our own historic standards at least) would mean that bad debt levels would probably quickly rise back to “unacceptably” high levels. The SARB Quarterly Bulletin showed the household debt-to-disposable income ratio declining to 79.4% in the 1st quarter of 2010, assisted by a slow rate of household credit growth and recovering disposable income growth that now outstrips credit growth, but far more of this is required. The road back to lower levels of household sector vulnerability will be a long and slow one, which should not be built predominantly on interest rate cuts and more relaxed lending criteria. Rather, it will require a few years of household credit growth which is substantially slower than household disposable income growth, so as to reduce the debt-to-disposable income ratio significantly. This will further reduce the all-important debt-service ratio (the cost of servicing the household sector interest rate hikes without “severe pain”. At present, we’re not there yet, and we shouldn’t fool ourselves. So are home lending banks’ credit criteria too strict, and killing the market? That’s always a tough one to answer. Certainly they’re a lot stricter than 4-5 years ago at the height of the boom. But then with a currently far higher household indebtedness level than back in the boom years, it is likely that even should criteria hypothetically be as loose as they were back then, less households would still be in a strong enough financial position to qualify for home loans. In addition, the high level of indebtedness makes the household sector far more vulnerable to economic shocks or interest rate hikes at present, compared with back in the boom times, which in effect leaves the housing market highly vulnerable to shocks, and this should keep lenders vigilant. Therefore, relatively cautious lending criteria, and slow household credit growth (including slow residential mortgage growth) leading to further decline in the household debt-to-disposable income ratio over the next few years, should probably be viewed in a positive light for the time being. Household sector debt-service risk declining, but still remains at high levelsData releases in recent days indicate that the level of risk to the household sector’s ability to service its debt in future may have started to make progress in terms of a reduction, albeit slow, towards lower levels. However, this level of “debt-service risk” remains high. Our Household Sector Debt Service Risk Index declined slightly in the 1st quarter, from 6.5 previous to 6.4. 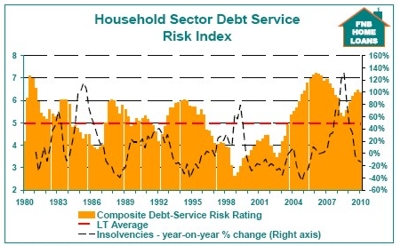 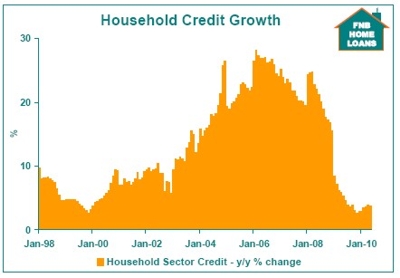 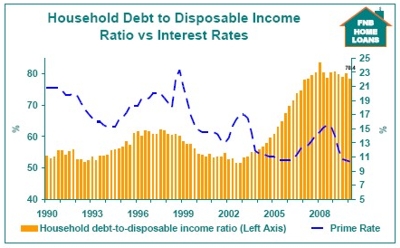 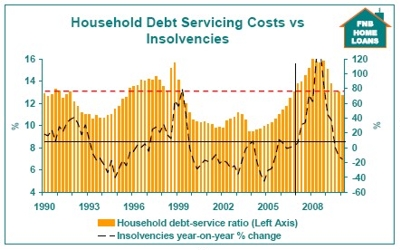