After a cut of 50 basis points in August, the South African Reserve Bank’s Monetary Policy Committee left the key monetary policy interest rate – the repo rate – unchanged at 7% at their September meeting. As a result, commercial banks’ lending rates to the public, i.e. prime and mortgage rates, also remain unchanged, at a level of 10,5%. Interest rates have been cut by a cumulative 500 basis points since December 2008. Mortgage repayments are 26,3% lower compared with late last year, based on the interest rate cuts since December, when the mortgage rate was at a level of 15,5%. However, the household sector remains heavily indebted, with the ratio of household debt to disposable income at 76,3% in the second quarter of 2009. Outstanding household mortgage debt was just below 50% of disposable income in the second quarter. The cost of servicing household debt as a percentage of disposable income was lower at 9,2% in the second quarter, while that of household mortgage debt tapered off to 5,8% in the same period. This was mainly the result of lower interest rates. CPI inflation for all urban areas was lower at 6,4% year-on-year (y/y) in August 2009 (6,7% y/y in July), and may moderate somewhat further in the near term. Producer prices are deflating since May this year, with price deflation at a level of 3,8% y/y in July. According to Absa’s calculations, year-on-year house price deflation slowed down since July. In nominal terms, house prices declined by 3,4% y/y in August 2009, after declining by 3,7% y/y in July and 3,8% y/y in June In real terms, prices dropped by 9,2% y/y in August, after a decline of 9,7% y/y was recorded in July. On a month-on-month basis, house price deflation started to taper off since April, with price inflation recorded in July and August. These month-on-month trends contributed to slower year-on-year price deflation in the past two months. Nominal year-on-year house price deflation is expected to continue to slow down towards the end of 2009, with price inflation forecast from early next year. House prices are forecast to decline by around 3% in nominal terms this year, with prices projected to decline by almost 10% in real terms. In 2010, nominal house price growth of just below 3% is expected. Prices are set to drop further in real terms next year, taking into account projections for nominal house price growth and inflation. 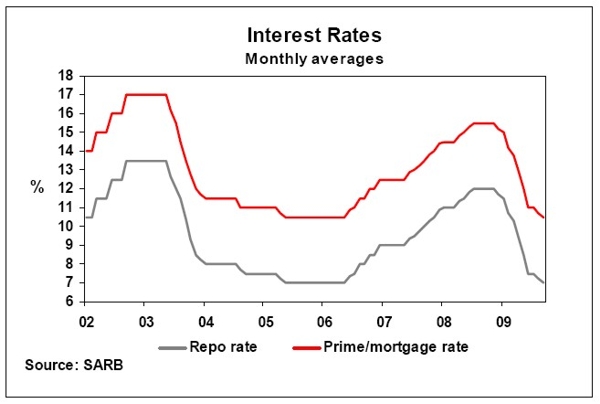