Price growth in the value of middle-segment homes for which Absa approved mortgage finance (see explanatory notes) continued to slow down up to October this year. The growth in the weighted average nominal value of small, medium and large houses came to only 1% year-on-year (y/y) in October, bringing the average price of a middle segment house to R1 005 800. Revised price growth of 3% y/y was registered in September. On a month-on-month basis the average nominal value of middle-segment homes declined further in October, but the pace of monthly contractions slowed down somewhat over the past three months. In real terms the average value of homes in the middle segment of the market was down by 0,2% y/y in September this year (up 1,9% y/y in August), based on consumer price inflation tapering off to 3,2% y/y in September from 3,5% y/y in August. The September year-on-year drop in real price levels was the first since November last year, with prices declining in real terms on a month-on-month basis since May this year. Trends in house price growth since mid-2010 are related to the base effect of a recovery in price growth in the second half of last year, while price trends over the past few months are believed to have been the result of economic developments. These include factors such as the slow pace of interest rate cuts during the course of the year (a cumulative reduction of 100 basis points since March), which are not seen as having a major stimulating effect on the property market, as well as continued job losses up to the third quarter of the year. Despite the fact that interest rates are at a 30-year low, consumers’ ability and willingness to spend and take up credit, including mortgage finance, are affecting the property market. Consumer confidence was largely unchanged in the first three quarters of the year, while the level of business confidence was lower in October after rising only marginally in September. 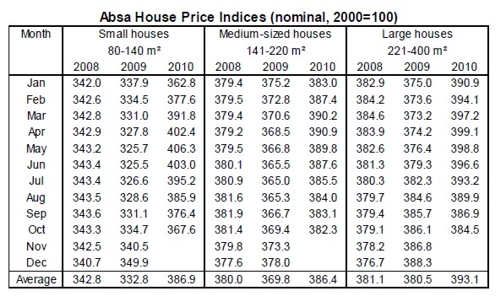 The average nominal value of small houses (80m²-140m²) increased by 9,8% y/y in October 2010, down from a revised 13,7% y/y in September, which brought the average price to about R732 200 in October. The average real value of a small house was up by 10,1% y/y in September, after rising by 13,5% y/y in August. In the segment of medium-sized houses (141m²-220m²) the average nominal value of a home was up by 3,5% y/y in October after increasing by a revised 4,5% y/y in September. This brought the price in this category of housing to around R955 200 in October. Real price growth of 1,2% y/y was recorded in September, down from 1,6% y/y in the preceding month of August. In the category of large houses (221m²-400m²) the average nominal price level dropped by 0,4% y/y in October – the first such decline since June 2009. This year-on-year deflation came after a relatively small price rise of only 0,3% y/y occurred in September. The average value of a large house was around R1,4 million in nominal terms in October. In real terms the average price in the large segment was down by 2,8% y/y in September, after declining by 2% y/y in August. The nominal value of middle-segment homes increased by an average of 8,3% y/y in the period January to October this year, with real price growth averaging 4,4% y/y between January and September. The real price growth is based on an average headline consumer price inflation rate of 4,5% y/y in the first nine months of the year. Taking account of house price trends up to October this year, nominal year-on-year price growth of between 7% and 8% can be expected for the full year. Real house price growth for 2010 is projected at between 2,5% and 3,5%, depending on nominal price developments as well as average consumer price inflation for the year. 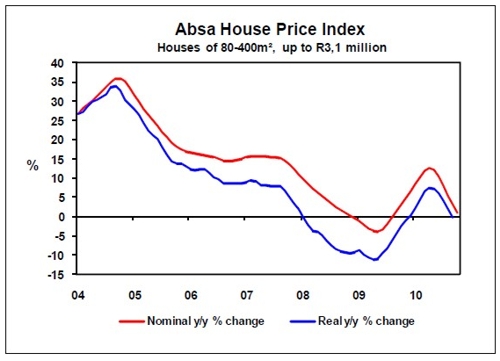 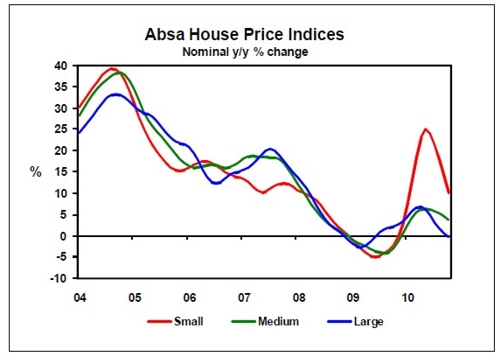 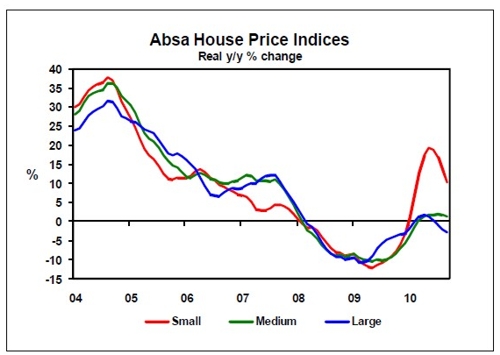