Although activity with regard to new housing construction remained under pressure up to September 2009 compared with the corresponding period last year, conditions appear to have improved somewhat over the past few months. On both the planning and construction fronts, volumes have picked up recently compared with preceding months. The real value of building plans approved for new housing came to R12,72 billion in the first nine months of 2009, which was 44,7% lower than the R20,92 billion recorded in the same period last year. The real value in respect of new housing constructed was down by 27,6% year-on-year (y/y) to R13,22 billion in January to September this year (R18,26 billion in the corresponding period of 2008). All real values are calculated at constant 2005 prices. In all three segments of housing the number of building plans approved was significantly lower in the first nine months of 2009 in comparison with the same period last year (see table below). However, the number of plans approved was up in all three segments in September compared with the past two to three months. The aggregate total of plans approved for new housing came to 5 417 units in September, up from 4 555 in August and 3 255 in July this year. On the construction front the total number of new housing units completed was down by 20,1% y/y in the first nine months of 2009, still driven by the segments for houses larger than 80 m² and flats and townhouses. In September the number of new housing units completed was 34,7% lower than in the same month last year, but was up by 25,4% to 4 963 units compared with 3 957 units completed in August this year. The number of lower-cost housing units constructed was slightly up in January to September 2009 compared with a year ago, but trends in the planning phase indicate that construction may come under some pressure in the short to medium term. Although there are some early signs that the residential building and construction sector may have improved somewhat over the past few months, activity remains low compared with historical levels. Markedly higher levels of activity on a year-on-year basis are not expected over the short term, taking into account prevailing economic as well as housing demand and supply conditions. 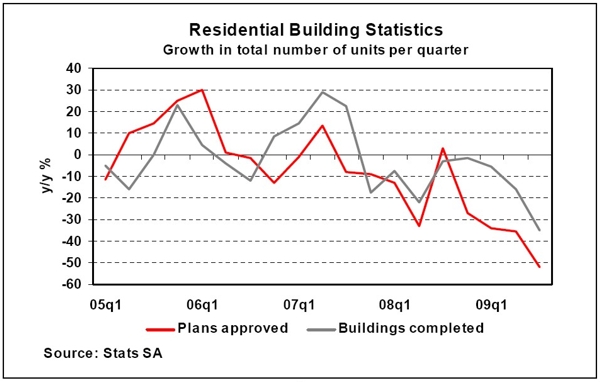 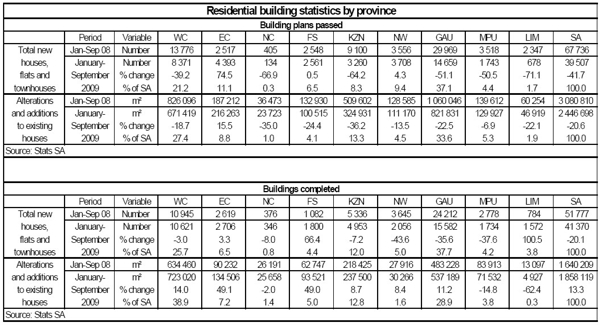