According to data released by the South African Reserve Bank, the total value of outstanding mortgage balances at monetary institutions, which includes both commercial and residential mortgage loans, increased by 4% year-on-year (y/y) to R1 028,5 billion in July 2010. Year-on-year growth of 3,4% was recorded in June. Outstanding mortgage balances were R5,1 billion, or 0,5%, higher in July compared with June. In the households sector outstanding mortgage balances were up 4,5% y/y in July (4% y/y in June) to a level of R747,3 billion. Month-on-month growth was R3,9 billion, or 0,5%, in July this year. Total credit extended to the household sector, which includes mortgage advances, increased by 4,6% y/y in July from 4,3% y/y in June. On a month-on-month basis the value of credit extended to the household sector was R6,2 billion, or 0,6%, higher in July compared with June. Recent trends with regard to a number of domestic economic indicators, such as gross domestic product (GDP), the purchasing managers index (PMI), business and consumer confidence, and the Reserve Bank’s leading business cycle indicator, point to a slowing economy. Both consumer and producer price inflation tapered off further to below market expectations in July this year, while concerns over the prospects for the global economy are growing. Against the background of these developments, the Reserve Bank’s Monetary Policy Committee (MPC) is expected to cut the repurchase (repo) rate by another 50 basis points to 6% at next week’s meeting. Commercial banks’ lending rates to the public, i.e. prime and variable mortgage rates, may also be lowered by 50 basis points, to a level of 9,5%, if the MPC cuts the repo rate as expected. Year-on-year growth in credit extension to the household sector, as well as mortgage advances, is forecast to remain in single digits up to the end of 2010. 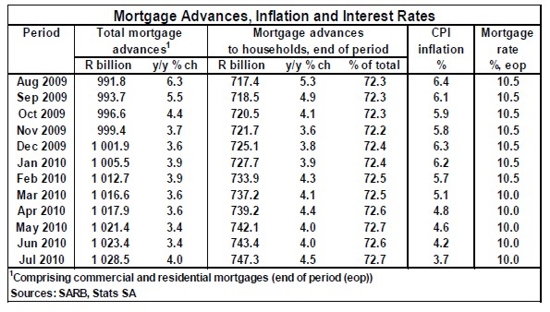