Graaff-Reinet: The crown jewel of the Karoo

Thanks to its stable and rapidly growing economy, and its location, Graaff-Reinet is developing at pace, largely due to its key role in supplying nearby Karoo towns and villages with goods and services.

Being one of the oldest towns in the Karoo and the fourth oldest in the country, with 220 heritage sites, Graaff-Reinet is also only a two-and-a-half hour drive from Port Elizabeth and three hours from George.

Graaff-Reinet is booming, attracting many new businesses and home owners, and even the provincial authorities have recognised its relevance and strategic location, with many departments relocating here, including the Department of Roads,

says Wayne Rubidge, area manager for the Karoo: Pam Golding Properties. He adds that the town, home to the Camdeboo Municipality, also provides a base for the police academy, a hotel school and other important facilities.

“With the reopening of the famous Drostdy Hotel earlier this year, following a R100m upgrade, the town is set to grow substantially over the next decade. The number of visitors is also increasing exponentially, with good schools, an active municipality and great tourism infrastructure available,” says Rubidge. 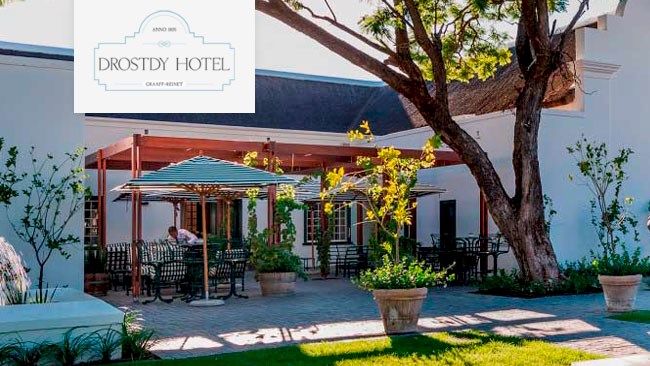 Neil Markovitz, managing director: Newmark Hotels, says following its revamp the Drostdy Hotel sets a new standard and precedent in the town. “The fantastic spin-off is that it is generating tremendous interest, and local and international tour groups are rerouting their trips into Graaff-Reinet. We are also starting to see niche businesses and coffee shops starting up there, and if these creative businesses continue to open I believe Graaff-Reinet has the potential to become the Franschhoek of the Eastern Cape,” says Markovitz.

Rubidge says the property market in the town is also booming, with the average house prices of more affordable homes increasing by as much as 30% over the past 24 months. “The entry level for a two-bedroom, historic cottage is currently in excess of R650,000, with a shortage of stock in this price range, particularly in what is called the ‘horseshoe’.

“Encircled by the Sundays River, the horseshoe is the older part of Graaff-Reinet and is popular with many newcomers looking to relocate to the town as it is within their price bracket and in walking distance of all shops and schools. With substantial demand for homes priced at about R1m, the number of properties available for purchase in this area may soon be in short supply.”

Rubidge says Graaff-Reinet is unable to expand north, east or west due to it being surrounded by a national park. Expansion to the south towards the country club is also limited as that area is bordered by the suburb of Adendorp, which is where the town’s numerous smallholdings are situated.

He says the price bracket of R1,2m to R1,5m was another that had experienced a notable increase in interest – and resulting sales – in the past 12 months. “For this amount you can acquire a larger family home, comprising three bedrooms plus a large erf.”

Rubidge says commercial properties are also sought after as they do not come on to the market very often. “Commercial investment opportunities are becoming scarce within the main central business district in Graaff-Reinet, and are limited to two streets: Caledon and Church streets.”

Belfast – the town that is set to boom
A well known trout fishing destination and one of the coldest towns in the country, Belfast in Mpumalanga is perhaps most famous for its contribution to South African horticulture.
This dowager ain’t dowdy
It’s difficult to imagine that the jewel in the crown of South Africa’s mountain passes – the Swartberg Pass – wasn’t built for the exclusive pleasure of us in the 21st Century with our bikes.
Area Review: Property in Napier, Western Cape
Hear about the small town of Napier from the locals.
Browse the Advice Centre