Set down roots in one of the large properties in the peaceful suburb of Lyttelton.

Lyttelton is a countryside suburb established in 1906 and located south of Pretoria’s city centre, consisting mainly of plots acquired over the years for housing and office developments. The suburb has an interactive community and large stands with big-roomed houses and expansive gardens, and lies between Selborne Street in the north, Limpopo Avenue to the south, Clifton Avenue in the west and Smuts Avenue to the east.

Clive Napier, ward councillor for Lyttelton Manor East for six years and Lyttelton Manor West for nine years, says a process of renewal with a number of infrastructure upgrades has been taking place in the suburb over the past few years. He says major planned developments in the area include an international convention centre, African Union headquarters and United Nations offices, to be built in the near future.

“Money has been invested in upgrading several shopping complexes, such as Lyttelton Shopping Centre and the Botha Avenue shopping precincts, as well as Unitas hospital. The suburb is gradually densifying, with large erven being subdivided and a number of high-density residential complexes and large business and commercial developments being built,” says Napier.

He says the suburb offers easy access to the highways to Johannesburg, OR Tambo airport and Polokwane, and four railway stations, including a Gautrain station. He adds that because the suburb is seen as a gateway to the north and south, and new property investments are pouring into Die Hoewes and Centurion Business District, positively affecting property prices, Lyttelton residents can look forward to a prosperous future.

Vickey Bosch, ward councillor and resident of Lyttelton Manor for 20 years, says good working relationships between ward councillors and Centurion municipal officials lead to quick responses to residents’ complaints, such as potholes and streetlights in need of repair. She says power interruptions and black outs tend to be lower than in neighbouring suburbs because of heavy reliance on power by Unitas hospital and the Gautrain, with fewer exposed areas where electricity cables can be stolen.

Bosch says top schools in the area include Laerskool Louis Leipoldt, Hoerskool Centurion, Lyttelton Manor High School and Fleur Primary, which aim to provide learners with a broad-based education reflecting the values and needs of the community. She says Unitas hospital, one of South Africa’s largest private hospitals, offers world-class healthcare with the latest technology and experienced medical professionals.

William Bowker, resident of Lyttelton for 43 years, says a major highlight of the area is the African Aerospace and Defence Show, with air demonstrations and aerobatic displays at the Waterkloof Air Force Base every second year. He says the base, which opened in August 1938 as Waterkloof Air Station, includes aircrafts such as the 208 Caravan, B200 Super King Air and Boeing 737-7ED.

“Another interesting feature of the area is the Lyttelton Dolomite Mine, which was opened by Amcor in 1936, to mine metallurgical rock for its furnaces at Meyerton. Production has since extended to include aggregates for building, stone-dust for coal-mining, fertilisers and agricultural lime,” says Bowker.

Entertainment and eating out

If you need to relax, spoil yourself for a few hours or a whole day at Thai Petal Massage Spa, with massages to soothe aching muscles. For animal lovers wanting a new pet or to do their bit for community service, SPCA Lyttelton has a variety of animals needing good homes, donations and care.

Lourens Botha, chairperson of the Community Policing Forum (CPF) and resident of the suburb for 20 years, says the Lyttelton community has a positive attitude and is committed to making the suburb a safe and healthy place to raise a family and grow old. He says residents enjoy supporting one another’s businesses, with many knowing one another by first names and calling one another friends.

“Residents of the area have the determination to stamp out crime with several security groupings run by volunteers under the CPF, co-operating with the metro police, SAPS and security companies. The community also assists with medical emergencies and socio-economic upliftment, and supports one another in daily challenges,” says Botha.

With a supportive community, interesting events and convenient educational and entertainment facilities, this suburb seems to offer residents everything they need when it comes to calling an area home. If you looking to raise a family in a safe, friendly environment or grow old among friends, Lyttelton may be the place for you.

Things to do in and around Lyttelton

Honeydew property and neighbourhood guide
This neighbourhood in the north of Johannesburg is sought after for its property and lifestyle. A local resident tells us what makes this Roodepoort suburb great.
Spotlight on PE’s Western Suburbs
There’s a lot more to be excited about in Port Elizabeth’s Western Suburbs now.
Rietvalleirand area and property guide
Outstanding estates that offer an excellent lifestyle have led to high demand in this laid back area.

Centurion East
From countryside to city in minutes 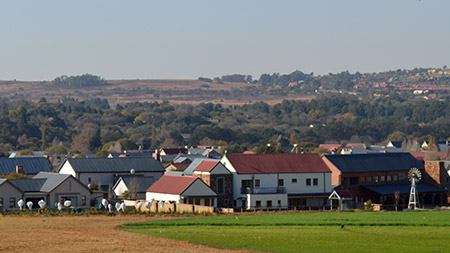 This suburb has become a ‘lifestyle of choice’ for many who don’t want to live in Johannesburg or Pretoria, yet need easy access to both. There are many lifestyle estates in the area which offer residents a good selection of safe, high quality property options. These gated villages have attracted a cosmopolitan community and Centurion functions as something of a mini city of its own. Although it retains a country-feel, residents can be on one of the major roadways to the big cities within minutes.
Browse the Advice Centre