Menlyn is one of Pretoria’s most preferred business areas. It’s a rapidly expanding (high-rise) residential area, popular for its prime location in the eastern parts of the city.

Located just off the N1 between the Garsfontein and Atterbury Road off-ramps on the eastern side of the freeway, the suburb of Menlyn is traditionally associated with the well-known Menlyn Park Shopping Centre and a small but established residential portion comprising higher-end conventional freestanding properties and a number of townhouse complexes. However, this scenario is changing rapidly. With the Menlyn Node Spatial Development Framework now thoroughly under way, over 100 traditional residences close to Menlyn Park have already made way for a wave of high-rise redevelopment projects. These include the robust Menlyn Maine development, several other office parks, retail space and leisure and entertainment facilities. This commercial upsurge and Menlyn’s prime location result in increased demand which developers are eager to meet with vertical uptown residential developments. Units range from comfortable studio apartments to luxury penthouses.

The “new” Menlyn will ultimately cater for a broad range of residents – young professionals taking up employment in the office parks preferring to live close to their places of work; people commuting daily between Pretoria and Joburg needing to be close to the highways; students attending educational institutions in the vicinity; as well as families preferring to stay in traditional homes in the quiet residential part of Menlyn and its neighbouring suburbs of Lynnwood Glen, Newlands, Faerie Glen and Garsfontein. Menlyn is regarded as Pretoria’s most central suburb, close to the city’s top shopping malls, restaurants, clubs, health, fitness and sporting facilities, schools, colleges, banks and many more. The new Menlyn will offer even more of the best of urban living. “People say that a change is as good as a holiday, but in my opinion, the change that has taken place in the Menlyn area could more fittingly be compared to a five-star, around the world trip,” says Johalet Steyn, estate agent.

The monthly bond repayment to purchase a typical property in Menlyn, namely a one-bedroom apartment with the median asking price of R2,025m, is R20,218 per month over 20 years at prime of 10,5% with no deposit. 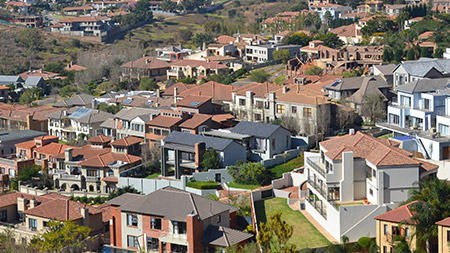 This neighbourhood caters for a broad range of people. Shopperholics can get their fix at one of the large malls. Those seeking entertainment or a good meal have plenty of choices. For nature lovers Rietvlei Nature Reserve offers fishing, game viewing, hiking and cycling.
Browse the Advice Centre