Pack a jersey before you take the steep drive up Fields Hill, which will take you to the green and gorgeous suburb of Kloof. That dip in temperature could fool even locals into thinking that they’ve left the balmy city of Durban, but that just isn’t true. While Kloof may be one of the more temperate suburbs of the city, it’s definitely still Durban and falls within the boundaries of the eThekwini municipality. After a long drive up that hill, you’ll be rewarded with open spaces, sprawling suburbs and a distinct lack of humidity. Think Durban but with a greater need for a fireplace in winter.

A cooler way of life

It may just be that the cooler climes attract people to this beautiful suburb, but they end up staying for the lifestyle. As blogger and Kloof resident Nicola Meyer tells us, “I love living in Kloof as there is lots of greenery and fabulous birdlife. We even occasionally hear fish eagles! It’s a great lifestyle as we have fantastic schools and shopping centres in the area. It’s also really easy to hop onto the freeway if we wish to get into central Durban”.

Why is it called Kloof?

“Kloof” is Afrikaans for gorge, and the suburb is named after the deep ravine formed by the Molweni stream. Kloof Gorge is a well-known lookout point and picnic spot that forms part of the Krantzkloof Nature Reserve. Spanning 584ha, the reserve is home to an abundance of wildlife, flowers and birdlife. Explorers have also discovered early Iron Age artefacts in rock shelters, and rumour has it that rock paintings have been spied too. 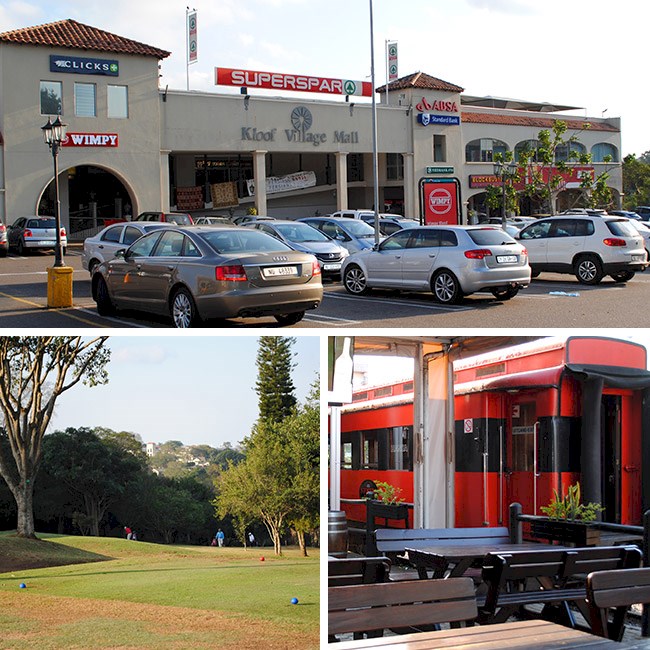 The charms of living in Kloof are unmistakable. With large properties that fetch quite high prices on the market, Kloof is home to some rather well-heeled members of society but has a big, community-driven heart. Large lawns and curling driveways give the area a stately appearance with a taste of yesteryear. Kloof was established as a homestead and railway stop during the late 1800s and evolved into the village of Krantz Kloof. Whether it’s the strong ties to heritage or the breathtaking vistas, Kloof has provided many a creative soul with a springboard to success. Members of Ladysmith Black Mambazo resided here, a number of artists call this suburb home, and a range of small galleries have opened their doors for exhibitions.

Set within the lush greenery of Kloof you’ll find Makaranga Garden Lodge. A multipurpose hotel, conference venue and restaurant, Makaranga is a place of peace and quiet. This 12ha property encompasses indigenous and exotic botanical gardens, 18 ponds and a waterfall. It’s also home to the largest collection of Zimbabwean stone art in southern Africa. But Makaranga is not the only place to escape to in Kloof.

A number of smaller B&Bs and boutique hotels can be discovered throughout the suburb. Villa Brae, conveniently located on Jameson Terrace, is a guesthouse with a difference, where regular live music acts and the warmth of a home-cooked meal help keep the Kloof chill at bay.

Tee off after tea

Although it’s mostly known for its gorgeous golf greens, Kloof Country Club is far more than just a pleasant place to putt. Combining leisure, dining and recreational activities, Kloof Country Club is also a haven for birdwatchers, thanks to an indigenous tree-planting programme that’s attracted many a feathered friend to the region.

Unmissable when in Kloof

A typical property for sale in Kloof is a four-bedroom house at an average asking price of R3,075m.

Properties for sale in Kloof comprise 55% of total sales listings in the Kloof and Gillitts area. They receive:

than properties elsewhere in the area.

Out and About Area Info

Family migrations: how do they affect seniors?
Emigration and ‘semigration’ have been a reality for many families in South Africa and beyond. What are the factors behind this and how can families deal with this?
Area Review: Property in Betty’s Bay
Unless you truly love nature and intend toeing the green line, don’t even consider buying property in Betty’s Bay. If, however, you’re into living lightly – and by that I mean a carbon footprint ...
Beer and Loafing in Mpumalanga
If someone had told me that Mpumalanga is a must-visit province for beer lovers I would probably have laughed at them or assumed they’d already imbibed a fair amount of the aforementioned liquid gold. As it turns out, an ...
Browse the Advice Centre