Don’t expect major “fireworks” in the Commercial Property Sector on the back of low-interest rates. This property segment is less sensitive to interest rate moves than the Residential Market, and negative economic growth forces are currently the dominant influence on it.

Last week’s SARB repo rate unchanged decision doesn’t alter the fact that the Bank has given very significant stimulus this year in the form of 3 percentage points’ worth of interest rate cuts. And indeed, this appears to have breathed significant life into the residential demand side of the property market. But it appears to be a tale of 2 markets, with the Commercial Property Market seemingly far more subdued and not taking the low-interest rate “bait”. And indeed, we would expect the Commercial Property Market to remain more subdued than Residential in the near term, more focused on the economy than on interest rates.

The sounds emanating from the property market in recent months seem to point to 2 almost totally different worlds. On the one hand, there seems to be some excitement in the Residential Market, with a significant number of credit- dependent home buyers taking advantage of very low-interest rates, while in the Commercial Property Segment the activity seems far more “suppressed”.

Of course, the various data releases run a bit behind the reality, so much of what one goes on is anecdotal and perception for the time being. But there are some good reasons to expect the residential market to be noticeably stronger currently, and likely in the remaining months of 2020 at least. We say this for the following main reasons: • The Commercial Property Market typically takes longer to respond to interest rate cuts that Residential

Firstly, following major interest rate cutting cycles in the past, the resultant growth surge in new residential mortgage lending has often been more rapid than that of new commercial mortgage lending. This points to households on average being more sensitive to interest rate moves, and typically making property buying decisions in a shorter time frame than their commercial property counterparts. 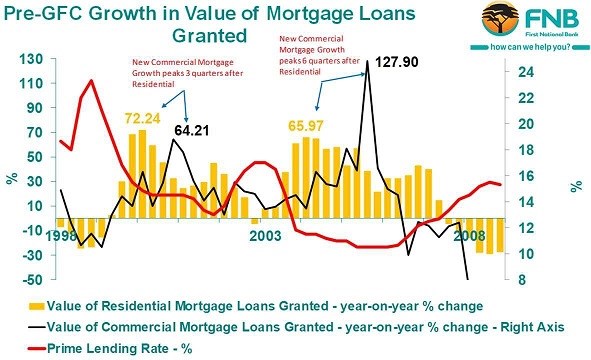 Taking a look back to the pre-2008 economic “boom times”, there were 2 major interest rate cutting cycles. Late in 1998, rates started to fall sharply, Prime Rate dropping from a mid-2008 high of 25.5% to 14.5% by early-2000. Not surprisingly, both the value of New Residential and Commercial Mortgage Loans Granted surged, but the Residential category’s growth peaked at 72.24% year-on-year in the 1st quarter of 2000, while the Commercial category’s growth peaked 3 quarters later at 64.2% in the final quarter of 2000.

Then, after a brief round of rate hiking in 2002, there was a 2nd round of rate-cutting during that boom period, Prime Rate falling from 17% early in 2002 to 10.5% by early-2005. Once again, the Residential Mortgage component’s growth surge peaked first at 66% in the 1st quarter of 2004, while the Commercial category saw its growth only peaking in the 3rd quarter of 2005, 6 quarters later.

Does this beg the question as to why this should be?

Typically, I believe that on average the household decision-making process regarding whether to buy a home or not is on average significantly quicker than that of the average business. In the case of the latter, there are arguably more considerations regarding cash flows and alternative uses for those, and often more people to consult with, i.e. business partners, shareholders, etc. On average, the amounts of money at play on the Commercial Mortgage side would be significantly larger, thus requiring more to consider perhaps not only from the business owner/manager but also from the mortgage lending institutions.

I am also of the belief that there is a stronger culture of property ownership prevalent in the Residential Market than is the case in the Commercial Property Market. Households often see homeownership as a creator of wealth, repaying a bond on something one owns as a better alternative to paying rent to a landlord. Perhaps, too, there is a certain sentimental attachment to homeownership, whereas for businesses the property that one operates in is probably more just seen as a means to an end, and if it makes more sense to rent from a financial or risk perspective then that’s what many business owners will do.

In the current economic environment, it may indeed make sense for many business owners not to rush into buying their property at the same rate that a portion of households appear to be going for the home buying option. The current recession, or at least the more recent stages of this recession, was caused by a policy shock to the production side of the economy. Many businesses were forced to temporarily close their doors for much of the 2nd quarter, losing a major part, or even all, of their sales revenue. The TPN tenant data suggests, therefore, that the business tenants have to date taken a far greater financial knock than residential tenants (largely households).

In the 2nd quarter of 2020, as lockdown got underway, the percentage of residential tenants in good standing with their landlords dropped from 81.52% in the 1st quarter to 73.5%.

By comparison, the percentage of commercial tenants in good standing dropped far more severely, from 77.85% to 50.36% over the same 2 quarters.

The lockdown was a production side shock, and to date appears to have done far more damage to businesses than to households.

This added to the likelihood that we would not see any significant commercial property demand response to interest rate cuts this appears to have turned out to be the case so far.

• But 2020 rate cutting has made a difference to the commercial property market nevertheless….providing crucial relief for tenants and owners, possibly containing the growth in the supply of property on the market.

However, we do see aggressive interest rate cuts as having an important function in the Commercial Property Market, but perhaps more on the supply side of the market.

Rather than bolstering property demand, the key role the rate cuts earlier this year has possibly been in providing relief to current property owners. Many property owners are likely to be under intense financial pressure in the near term, either as a result of their own business pressures or as a result of a larger part of the business tenant population’s financial squeeze and resultant battle to pay rent. Cutting costs on property owner debt is thus crucial. And this may have impacted more significantly on the supply-side of the property market than on the demand side, containing the number of property owners being pressured into selling their properties due to financial pressure, to lower levels than would otherwise have been the case. Severe business financial pressure risks “flooding” the market with properties, but aggressive rate cuts may have curbed the growth in such property supply.

However, the 2020 rate cuts probably haven’t been sufficient to prevent a significant oversupply of property in this economic environment, but we do believe the supply glut may have been headed for far higher levels had there hypothetically been no rate cuts.

At the same time, rate-cutting may have relieved the financial pressure on the beleaguered tenant population who often have other forms of debt, supporting rental payment performance, thus making a difference, but again not necessarily being enough to fully offset the impact of lockdown and recession on tenant income.

In short, the 300 basis points’ worth of interest rate cuts to date in 2020 has likely provided significant support for the Commercial Property Market through providing relief to businesses. However, in this severe recession, the stimulus impact has largely gone unnoticed, overshadowed by the negative recession economic impact.

The Residential Property Market, by comparison, appears to have responded quite noticeably to interest rate cuts. To an extent, this is normal, the residential market having responded more rapidly to interest rate stimulus in prior major rate-cutting cycles too. But apart from the usual more rapid response by residential, the COVID-19 lockdown was different to prior recessions in that it impacted directly on the production side of the economy, thus causing a far more severe economic impact on the Commercial Property owners and tenants than on residential…..to date, at least. Of course, should businesses not recover quickly post-lockdown, this impact can filter through to the Household Sector and thus to the Residential Market via labour shedding. But as things stand currently, the Residential Market appears to have responded far more significantly to this year’s interest rate cutting than does the Commercial Property Market.