The growing popularity of False Bay has seen an increase in traffic congestion, but planned infrastructure upgrades will ease traffic flow.

During the last decade, there has been a growing awareness of False Bay’s unique charm and the lifestyle and value it offers, but in many areas growth and development have been restricted by the region’s natural topographical limitations and constrictive infrastructure.

Steve Thomas, Franchise Manager for Lew Geffen Sotheby’s International Realty in False Bay and Noordhoek, clarifies: “False Bay’s laid back, seaside village atmosphere is largely due to its idyllic position between mountain and sea, but it has also presented challenges, including the fast-dwindling availability of greenspace and the increasingly congested roads linking the towns and villages.

“However, the upgrades to the Kommetjie Road (M65) that serves Capri, Musiphumelele, Kommetjie and Noordhoek are now well underway which will allow for further residential and commercial development as well as better access to areas like Simon’s Town and Fish Hoek.”

Kommetjie Road (M65) is being upgraded to a four-lane dual carriageway between Capri Drive and Corsair Way with the additional turning lanes at main intersections to further ease traffic flow. This includes upgrades to the stormwater infrastructure and the relocation of electrical cables and ducting for fibre-optic cables.

Mike Solomon, Area Specialist for Lew Geffen Sotheby’s International Realty in Capri, Faerie Knowe and Sunhill believes that one of the nodes that will benefit significantly from the improved road network due for completion next year is the mountainside suburb of Capri.

It will effectively open up the existing Capri Village and allow for much-needed development around this mountainous area with its breath-taking views.

“Capri currently offers exceptional value for money and a broad range of property options, from two-bedroom starter homes for R1.6 million to mansions with all the bells and whistles for around R5m.”

Although properties here are more accessibly priced than in neighbouring areas like Noordhoek, the entry point is steadily rising. According to Propstats, in 2016 five properties changed hands in Capri at an average sale price of R1.87m, with the highest price realised R3.4m and the lowest R749 000. Last year, eight sales realised an average sale price of R1.8m with the highest and lowest prices being R2.31m and R1.375m respectively.

“Market activity is currently the least active it has been in five years and this is due to a number of factors, including economic climate, the disruptive roadworks which discourage many buyers and the general wait-and-see investor sentiment precipitated by the ongoing political turmoil and upcoming elections.

“Properties priced below R2m are still selling relatively quickly, but those R2.5m plus range are taking considerably longer to move this year. There is also considerable demand for properties that lend themselves to dual living, either for extended family or for additional income.” Solomon says that although sales have dropped, there has been consistent buyer interest and he predicts that once the roadworks are complete, this interest will convert to sales and Capri will start to see a healthy increase in property price growth.

“Now is definitely the time to invest in the area as it still offers exceptional value as well as an incomparable lifestyle. Despite the village atmosphere, residents enjoy close proximity to an array of amenities, including excellent new schools, medical services, several good shopping centres, top class golf courses and myriad outdoor and sports facilities, including scenic walking trails and beautiful beaches.”

There was a time when living on the beyond Constantiaberg was considered too far from the CBD and way off the beaten track, but Thomas says that nowadays more and more city dwellers are looking to move away from the urban frenzy and are happy to commute for longer in exchange for a more tranquil lifestyle.

“A growing number of people now also work from home and for them internet connectivity is more important than distance and the upgrades in the area include an improved digital infrastructure.”

He concludes: “This well-used stretch of road has historically been a tourist gateway to Kommetjie and the more remote areas of Scarborough and Misty Cliffs, but it has become increasingly inadequate in the face of rampant development during the last decade.

“However, after decades of lobbying, the City’s has recognised the value of making a substantial investment in the area and this will not only improve access to these areas and engender revival but will also stimulate ongoing improvement which, in turn, will translate into solid returns for those who have invested here.”

Luxury living in South Africa
Three South African suburbs have been highlighted as the epitome of luxury living in South Africa. Here's why these three regions are attracting the well-heeled elites and big spenders.
How the market has changed… according to Monopoly
A look at the South African property market over time, according to the Monopoly board.
Sandton remains property hot spot in Gauteng
The housing markets in Gauteng have experienced different growth levels.
Estate Agents discuss the market in Berea Durban
Hear from local property experts what makes Durban’s Berea such a popular place to live in. 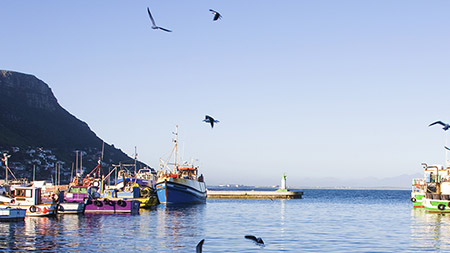 Affectionately know by residents as the “Deep South”, False Bay is a beautiful, laid-back area of Cape Town. It has incredible historical villages, beautiful scenery and nature, and some of the best beaches in Cape Town. All the areas of False Bay offer a safe home for families with a sense of community. The lifestyle in the South Peninsula is slow and life moves at a relaxed pace. It's the perfect area for people scaling up, slowing down or just wanting to enjoy all the benefits of raising a family in superb natural surroundings with easy access to Cape Town.
Browse the Advice Centre