If you have money to invest, you simply can’t go wrong buying in Stellenbosch. Here's why.

Property in Stellenbosch is always sought after, but it’s the student market in “Stellies” that keeps the market hot in good times and in bad. Estate agents there are hard-pressed to keep up with the demand for property to accommodate students in South Africa’s oldest town. “If you had phoned me three or four days ago, I could have showed you four [sectional title] properties. Today, we have none,” says Shawn Pieterse, the principal of Realnet Stellenbosch. With a student population of more than 25 000 and space to accommodate only about 4000 in the varsity’s 23 student residences, that leaves a big shortfall – and an even bigger opportunity for savvy investors.

“The closer you are to campus the more valuable the property. A bachelor pad on campus will cost you anything from R650k to R900k; a one-bedroom flat between R800k and R1.1m; and a two-bedroom from R1.2m – though I’ve sold one for R3.6m,” says Pieterse. So what kind of rental can you command for flats in Stellenbosch? Antoinette Retief works for JPS Trust, a rental agency that has been serving the student market in Stellenbosch for the past 18 years. She says that on campus, a bachelor flat will bring in between R3400 and R4000 a month; a one-bedroom spot can get you between R3800 and R4500; and a two-bedroom flat somewhere between R5800 and R6600 a month. If the apartment is off campus, you’ll have to drop your rental by about R1000. Although you will never be shy of tenants, Antoinette says you can’t always expect your rental income to cover your entire bond, especially if you’re a recent buyer.

That’s nowadays, but in the late 1990s when Terry Demmer bought a one-bedroom flat on campus it was a different story. Although Terry never bought the apartment to let to students, but rather to accommodate his daughters, at the time it was more expensive to keep a student in res than in private residence. Now the reverse is true. Terry can’t recall exactly what he paid for the apartment, but it was in the region of R100k and by the time he sold, four or five years later, he had more than doubled his money. Had he hung on to it, the flat would be worth a packet now. “I suppose you always regret selling years down the line, but it was a great investment and we ploughed our profit back into property, although not in Stellenbosch.” 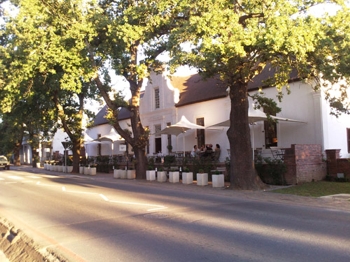 According to Pieterse, you can expect 28 percent growth per annum on well-positioned sectional title property in Stellenbosch. Dot Foster is the owner of RE/MAX Oaktree in Stellenbosch. Her franchise if one of RE/MAX’s leading offices in terms of sales in the Western Cape. Dot has lived in Stellenbosch for over 35 years and has been selling property in the town for the past 10 years. “In Stellenbosch you don’t get a very good return on investment from rentals, but you make up for it in your capital gain,” she says. “In the student rental market, the highest return is 6 percent a year. But your capital gain is as high as 20 percent a year – excluding the last two years.” Dot says that the market for property in Stellenbosch is robust, especially this time of year with students streaming back into town.

“This time of year, we have a waiting list of buyers. People sending their children to university here realise that in three years, they will have made back their money [spent paying a bond] and covered the cost of their child’s education.” About four years ago, Dot bought a two-bedroom flat on the edge of campus in a new development. “I paid a little more than R500k and sold it three years later for R1.1m.” Dot also had another flat in the centre of town, which she hung on to for six years and made more than three times what she paid for it. “Both of those were wise buys and we sold at the right time for the right price. But well-priced property in Stellenbosch usually sells in a month. In December, we had our quickest sale – a same-day sale of a flat.” Dot says Stellenbosch has a good mix of stock and something to satisfy most people. “We have properties ranging from R20m, including farms and wine farms, to beginner homes for R1.3m.” Your average family home in Stellenbosch has three bedrooms, two bathrooms, two living areas and a double garage. (In town, the stand sizes are about 850-900 square metres and in the cheaper areas, they’re about 250 sqm.) A house like this would cost you about R2.5m to buy and between R12000 and R18000 to rent. In terms of stock, Dot says as far as houses go, there isn’t a shortage of stock yet, but she foresees it happening. “At the moment, we don’t have enough in the price range that we have buyers for. When I started this office in December 1999, we had hundreds of flats. Now we have less than 100.” According to Deeds Office data supplied by Lightstone, 82 percent of market stock in Stellenbosch is sectional title property. The average price of a sectional title property over the past 12 months was just over R1m and the average price of a freehold property was R2.4m.

While the selling price of freehold property has, on average, fallen gradually since 2007, the price of sectional title property has steadily increased. Last year there were only 192 properties sales in Stellenbosch, 18 of which were freehold properties and 174 were sectional title sales. Of the total number of sales last year, 47 were for new properties. So why would you want to live in Stellenbosch? The question is: why wouldn’t you? Well, besides the fact that it’s exceptionally beautiful and surrounded by mountains offering a lifestyle second to none, especially if you have children, it’s only 50km from Cape Town – which is an easy daily commute. Having 100-odd wine farms, including many of SA’s best, in your neck of the woods is also a massive plus. “The many good schools in Stellenbosch make it a very desirable place to live. You also have the university in the centre of town – a large taxpayer that maintains its asset well – and strong investment in the town [think the Eikestad Urban Renewal Initiative]. Plus you have limited land available. Municipal regulations make it virtually impossible to subdivide agricultural land.” For those seeking the country life, that’s a blessing – albeit a mixed blessing. Stellenbosch, like many towns in South Africa, is an uncomfortable mix of the super-rich, the painfully poor, and those somewhere in between. The provision of housing to the poor, who live on the fringes of town, as well as the delivery of services to these communities, has been hampered by politics and the switch in power between the ANC and the DA.

Out and About Area Info Activities RealNet

Area Review: Property in Jeffrey's Bay
Jeffrey's Bay may not be on your list of holiday destinations, but it should be.
Agent commentary on Plattekloof
Learn more about Plattekloof from local property experts.
Area Review: Property in Waterfall
Once upon a time, Hillcrest was a village and Waterfall didn’t really feature. These days it's a different story.
Browse the Advice Centre