Once upon a time, Hillcrest was a village and Waterfall didn’t really feature. These days it's a different story.

Hillcrest is a hustling, bustling town and Waterfall is where folks are retreating to enjoy more of a “country” lifestyle. For some, living in Waterfall and commuting into Durban every day (an 80-minute round trip) is worth it. When there aren’t road works in Hillcrest, the drive is smooth, pretty and relatively painless. And when the road through the famous Kranskloof Reserve is operational, it’s even better. ![Property in Waterfall offers a good return on investment.

The nature reserve – 43 hectares of stunning scenery – surrounds Waterfall. This is a draw card for nature lovers, hikers, bird-watchers, bikers, climbers and fans of lazy, Sunday afternoon picnics. If you’re lucky enough to bag a home with a view of this gorge, you’ll covet your patio and spend countless sunsets sipping pina-coladas thanking your lucky stars that you traded in your city life. Teresa Atkinson is an estate agent at RealNet in Hillcrest. She specializes in the rental market in Waterfall, where she has lived for the past nine years. Teresa says that the rental market in Waterfall is very busy. “There’s great value for money out here. You can get a lovely property in Waterfall (three bedrooms, three bathrooms and a pool) for R6500 a month.” “I just love the area. It’s so relaxed and the people are friendly. Even at the grocery store, the cashiers know my hubby and I and they ask how our grandkids are doing.”

Teresa says Waterfall is a real family suburb too, with plenty of schools in the area or on its doorstep: Forest View Primary School; Hillcrest Christian Academy; and Waterfall College to name a few. Teresa says that for some people, Waterfall is considered “far, far away”. Durbanites aren’t accustomed to having to drive very far to get from A to B. Growing up in “the Hills” (aka Hillcrest) evokes memories of the great trek to “town” - Durban City or the beach front. It was the mission of all missions, a whopping 30kms! (Not like living in Gangsters Paradise – aka Gauteng, where a 30km drive is like nipping to the tearoom.) “It’s really worth living out here. We have the charming country feel but everything we need at our doorstep too. We have shops like Woolworths, a library, dentists and doctors. And we even have our own cinema! Not even Hillcrest has a cinema.” Over the past 10 years, Waterfall has undergone something of a makeover.

Just minutes from Waterfall there’s now a snazzy new golf course on the Cotswold Downs luxury estate; a mall (with 24 shops); and a number of Tuscan-style estates. Barrie – also known as “The Curtain Lady” – bought her delightful three-bedroom, two-bathroom home in a security estate in Waterfall three years ago. The Curtain Lady specializes in stylish and sophisticated curtains and blinds for boutique stores and interior decorators. “I just loved the open space and the stunning views of the Nature Reserve, which is why I bought this place.” It was also important for the Curtain Lady to have ample space for a few of her favourite things: her sewing studio, faithful Alsatian pooch Jordon and her two old cats, Piddles and Splash. Barrie says that the price was just right. She paid just over R800k for her 182sm house and its 1300sm garden. Barrie converted her double garage into her sewing sanctuary. According to property research experts Lightstone, these days, the municipal value for Barrie’s home is around R1,3m. “Even in these trying economic conditions, the return on investment for property in Waterfall is good. I know if I sold now, I’d make a profit on my place.” Lightstone records 36 transfers in Waterfall in the past three months – the average selling price of a property in Waterfall was R900K. About 80% of all market stock in Waterfall is freestanding properties.

These days, sectional schemes in Waterfall are out-performing their freehold counterparts. In 2004, a sectional scheme in Waterfall went for about R450K. These days the same properties have doubled in value. Freehold properties averaged about R600K five years ago and are averaging about R900K this year. On the downside, Barrie isn’t impressed with the state of the roads in Waterfall. “The area is littered with potholes. The access roads really aren’t wide enough either.” Barrie adds that getting into Durban from Waterfall can be a real schlep. “Getting through Hillcrest is the pits. There is so much construction happening on Old Main Road and this can cause major delays. It takes 40 minutes to get from Waterfall to Durbs but if we had a new freeway (as has been threatened for years), it would take 20 minutes instead.” Barrie says that the selection of shops in Waterfall isn’t exactly fabulous. “Even though the area has grown and developed, if you want a good array of shops, it’s best to head into Hillcrest (a 10-minute drive away). If you want to grab a good cappuccino in Waterfall, then Café Alulait is the place to go.”

Out and About Schools Area Info Activities Shopping NQF4 RealNet 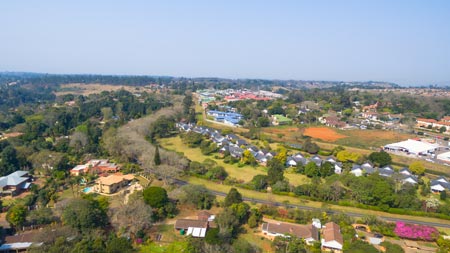 Nestled in the Valley of a Thousand Hills, Hillcrest has a slightly cooler and less humid climate than other parts of Durban. It’s a family-friendly suburb, with many private schools, parks and kid-friendly restaurants. Estate living is very common, with many estates boasting well-kept golf courses. Built amongst rolling hills, houses have magnificent views of the valley and lush, surrounding hills. Just 30 minutes from Durban city centre, Hillcrest is away from the hustle and bustle. The area has a great sense of community, and a mix of country and cosmopolitan lifestyles.
Browse the Advice Centre