Kempton Park – also known as “the airport town” – is situated north east of Johannesburg and south of Pretoria, smack bang between these two cities. Home to Africa’s busiest airport, OR Tambo International, residents list proximity to this air traffic centre as one the pros and cons of living in Kempton. On the up side, the travel gateway is a hop, skip and a jump from home. On the down side, the noise and air pollution from the airport is a nuisance. Kempton Park also boasts the state-of-the-art Esselen Park Centre of Excellence. This impressive establishment (497 hotel rooms, massive sports grounds, a gymnasium with sauna and swimming pool, and conference facilities) will be home to Bafana Bafana and used as their base for the 2010 Fifa World Cup finals. Like many South African towns and cities, Kempton Park has its historical heritage in something of a farm story. The story goes that it was in the early 1900s that Bavarian-born Karl Wolff came to South Africa to work. Years later, following the gold rush, he apparently sub-divided his Zuurfontein farm into residential stands. He named this new village “Kempten” after his place of birth. Years later, the town’s name was anglicized to Kempton Park. When gold fever hit the Witwaterstrand, it forever changed Kempton Park and the rest of Johannesburg. Industry developed in Kempton Park and community development followed suit. These days, Kempton Park still has a thriving industrial economy and areas like Spartan, Isando and Choorkop provide employment for thousands of residents. Kempton Park is also close to Tembisa, one of the country’s biggest townships.

In terms of the Kempton Park economy, investors are also anticipating that the long-awaited Gautrain will have a positive impact on the area. According to property research gurus Lightstone, 55% of market stock property in Kempton Park is made up of sectional title schemes. In the past year, 282 sales were recorded by the deeds office for Kempton Park Central – of which 206 were sectional scheme properties. On average, these homes went for R550K each. The sectional scheme park in Kempton Park Central has fared well – what went for 180K in 2004 is currently valued around R420K. The freehold market has also enjoyed a solid return on investment. Homes valued at R400K in 2005 are now valued at approximately R920K. Belinda Redinger has lived in Kempton Park for almost 20 years. Together with her husband, she rents a lovely one-bedroom granny flat. Belinda says that for R3500 a month (including lights and water), the couple has a garden and a swimming pool. “We live in a nice area and have extras like an electric fence, electric gates and a car port.” If the banks relax their lending criteria, Belinda hopes to buy property in Kempton Park. “It’s great being so close to the airport and to the Johannesburg and Pretoria CBDs. The noise from the airport is not great but that’s probably the only negative thing I can say about the area.” 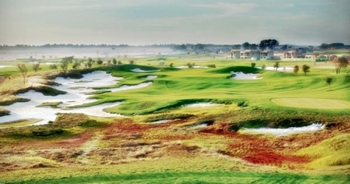 Andre Landman is an estate agent at Seeff in Kempton Park. He’s been in the business for the past 20 years. “I’ve witnessed phenomenal growth in the area, especially in the past 10 years. The upmarket element has developed in Kempton and now we have many security estates and one of the country’s best golf estates – Serengeti.” Landman says that he has the deal of the century at Serengeti at the moment. “I’ve got a few 1000sqm stands going for about R650k! Homes on this estate have been known to sell for R11-12m so an investment like this is a real steal.” But if golf estates aren’t your cup of tea, there’s apparently a lot on offer in Kempton Park. “The entry level homes are really affordable. R500K for a two-bed, one-bath is value for money in a growing and developing market like Kempton Park. Then there are the family-type homes (3 bed, 2 bath, garden etc) for about R850-900k.” Andre agrees that the sectional scheme market in Kempton is outperforming the rest. “You can’t go wrong with a sectional scheme property in Kempton Park – it’s value for money and we’ve got everything in Kempton: the airport, malls, great schools, good roads, easy access to the highways and a thriving industrial and commercial sector.” If you need to find anything in Kempton Park - from a butcher to a baker, “The Definitive Website of Kempton Park”: http://www.kemptalk.com* is the place to go.*

Out and About Area Info Activities

Zip lining in Constantia
If you’d like to get your blood pumping, SA Forest Adventures is for you.
Beer and Loafing in Mpumalanga
If someone had told me that Mpumalanga is a must-visit province for beer lovers I would probably have laughed at them or assumed they’d already imbibed a fair amount of the aforementioned liquid gold. As it turns out, an ...
Beechwood Gardens: the jewel in Hyde Park’s crown
Jeweller Christopher Greig’s Hyde Park property contains a magnificent 3.5 acre classic garden that is open to the public.
Plattekloof area and property guide
Hear from the locals, why they choose to live in Plattekloof.
Browse the Advice Centre