Centrally located and secure – no wonder growth in Midrand is exploding.

Where it all began..

As far as areas in Gauteng go, Midrand is mushrooming. With its origins as the small suburb of Halfway House – situated directly between Pretoria and Joburg, as its name suggests – today the large expanse that makes up the Midrand area stretches all the way from Kyalami to Centurion. Conveniently, there’s a Gautrain station in the area and the N1 highway runs right through the middle of it, making it ideal for commuters heading both north and south.

Just a few years ago, Midrand featured large tracts of land whereas today, most properties are contained within complexes and housing estates. However, there are still some suburban areas with groups of standalone houses. Nolishka Bramdaw, a resident of Noordwyk, one such area, says, “My favourite thing about living in Midrand is the peaceful atmosphere.” Nolishka also comments on Midrand’s evolution over the years towards estate living. “With more estates and complexes springing up, more people have been encouraged to move here, which has in turn raised property prices in the area,” she says.

Another Midrand resident, Karen Willemse, says that in terms of property, Midrand has a good mix of old and new, with bigger houses on the outskirts and newer developments in the centre. While Karen says she loves living in Midrand because it’s central and close to work, the new builds have had a negative impact on travel time. “A 5km journey can make you break open the lunch box wishing you packed in your thermos with strong coffee, because it can take anything from 40 minutes to an hour to get to the other side,” she says.

As far as estates go, the largest in Midrand – and in South Africa – is the 640Ha collection of Waterfall Residential Estates, consisting of the Country Estate and Village, an equestrian estate, and two mature lifestyle estates, Waterfall Hills and Waterfall Valley.

Geoffrey Crow, head of marketing implementation: Century Property Developments, the company behind the Waterfall developments, says, “These lifestyle estates offer residents an upmarket development in which to buy or build their dream home. Waterfall is aimed at people who value a full and varied lifestyle, offering a spacious, secure environment for their family, with upmarket living and property value growth.”

The estates are highly secure, with private access through heavily manned security gatehouses. Facilities include 37km of walking and biking trails, a lake for non-motorised water sports, a clubhouse with full gym, squash courts, restaurants, indoor kids’ play areas and even a private school.

What do the locals say?

Anique Broskie, a resident of Waterfall Country Estate and Village, says that her favourite thing about it is the secure environment that she feels is perfect for bringing up children. “Our kids love riding bikes, scooters, skateboards and playing in the parks with neighbours – and most of them attend the same school inside Waterfall.” And developers have increased the attraction for young families by creating facilities within it. Says Anique, “We are still surprised at how many young families there are in the Waterfall Country Estate and Village, probably due to the fact that the developers opted to open schools instead of a golf course.”

Jennifer O’Ehley, another Waterfall Country Estate and Village resident, agrees that the best part about living in the estate is the lifestyle it allows them. “Everything is close and easy – shops, restaurants, school, friends. We never want to leave! Our boys walk to their mates, ride their bikes down the street and live such a good life, like we used to do many years ago.”

Outside the five residential estates, the new Waterfall City is currently being developed and will contain public retail, commercial and office nodes, including a Gautrain station, five-star hotels, more schools and the Mall of Africa, set to be the largest single-phase shopping centre in the country.

Midrand is an attractive option for us: it’s a fast growing node and is also centrally located within easy reach of Johannesburg, Pretoria and the East Rand. With a high demand for housing and a limited supply currently available, we see real property growth to make it a prime investment opportunity.

Spotlight on Claremont
Excellent schools, a central location, neighbourhood parks and lots of coffee shops – Claremont ticks all the boxes.
Spotlight on Hillcrest
Situated on the ridge of a main road that runs from Durban to Pietermaritzburg, Hillcrest has become far more than the sleepy hollow it once was.
Rietvalleirand area and property guide
Outstanding estates that offer an excellent lifestyle have led to high demand in this laid back area.
Spotlight on Amanzimtoti
Looking for a great work-life balance in KwaZulu-Natal? Meet Amanzimtoti. 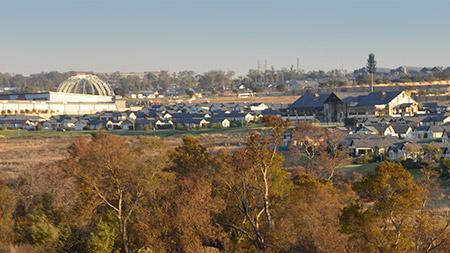 Midrand, also known as the Halfway House, was established as a municipality in 1981. It is a very vibrant, accessible area that is growing at a rapid rate. Families flock to the area to take advantage of the laid back lifestyle and variety of amenities. There is plenty of employment nearby, with many large businesses taking advantage of Midrand's convenient location between big cities. Vodacom, Cell C, Neotel, Altech Autopage and many more large companies have offices situated here, and with its growing residential areas this is one of the up and coming areas in South Africa.
Browse the Advice Centre