Area Review: Property on the Bluff

Situated between the Durban Point Waterfront in the north and Brighton Beach down south, is the cozy seaside area of the Bluff. And if residents of Durban are Durbanites – then it makes the folks from the Bluff, “Bluffers” - right? Whatever their official name, they’re the very proud crowd that lives on the green belt that separates the sea from Durban Bay. Suburbs in the Bluff include Fynnlands, Wentworth, Grosvenor, Ocean View, Austerville and Treasure Beach. Bluffers have a reputation for being born, bred and buried on the Bluff. Jaco deLange has been living on the Bluff for almost 20 years. He says he’ll never leave. Back in the day, the popular taunt, “Rough, tough and from The Bluff” was leveled at anyone who called this area home. Jaco says that after the war, soldiers were given jobs and homes in the Bluff and that’s where the saying originates. “They worked on the railways and at the harbor and were a little rough around the edges.” 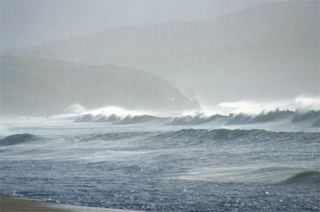 But, another theory is that the saying came from the surfers who were fiercely protective of their beaches, their waves and their babes. And locals will tell you that the Bluff still has some of the prime surf spots around and is home to the majority of the swells in Durbs. If riding the waves isn’t your thing – take a dip in the warm Indian Ocean at Treasure Beach and Ansteys – both are great beaches for swimming. Once upon a time, Bluffers used to have to trek into the city (the Durban CBD – about a 15-minute drive) to get all the niceties. But, the purveyors of creature comforts have since moved in and there’s really no good reason to leave the sun, the sea and the safety of the Bluff. Jaco says that though most Bluffers are settlers, there are a lot of wealthy Jo’burgers buying property on the Bluff too. Jaco also happens to be an estate agent at REMAX on the Bluff. He isn’t bluffing when he says that he could carry on forever as to why this is the place to live. “The Bluff is very safe – we have community policing forums that patrol all residential areas and the beaches. Then, we have two major shopping malls, our own golf course and private beaches. This area is really a hidden gem and property on the Bluff offers just as much – if not more than Umhlanga Rocks, Durban North and Ballito, at a fraction of the price. In a nutshell, if you want safety, value for money and don’t want to compromise on your living standards, then look no further than the Bluff.” Jaco says that the return on investment on the Bluff has grown 20% over the past five years and is still growing. 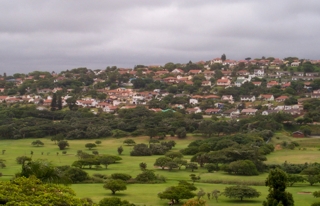 According to property research experts Lightstone, property on the Bluff in areas like Brighton Beach has delivered a solid return on investment over the past five years. A freehold home that cost about R560K in 2004, is now selling for about R940K. And in Grosvenor, homes that went for R340K in 2004 are valued at R830K in 2009. But, in Treasure Beach where all the market stock is freehold, property prices have been a little erratic of late. What went for R340K five years ago soared up to R1, 1m in 2008 and has dropped to about R650K this year. Jaco attributes this to the refinery near Treasure Beach. “The one side of Treasure Beach is beautiful – huge properties with sea views. Then there’s the other side of the tracks – the small holdings that are close to the refinery. The average house price overall has dropped because people on the small holdings are trying to get away from the refinery and in doing so are creating a high supply of properties at low prices.” That said, Jaco is confident that within the next five years, property on the Bluff will show even more growth than they have in the past. He says that when he got into the Bluff property market several years ago, things were very different to the way they are now. “When I joined the market it was booming. We’d arrive at the office in the morning and make a deal (sell a house) in the afternoon. Since the drastic market changes, we found things to be more challenging. On the upside, tough economic times and a sluggish property market has cleansed the industry of fly-by-night agencies. Whatever is still standing is probably more professional.” Jaco urges prospective buyers to seriously consider the R800-R900K residential properties for sale in the Bluff. He says that despite the recession, this particular segment of the market is pumping and has a lot to offer. “These homes are selling quite quickly. This is the time to buy.” Jaco is also enthusiastic about what the Bluff has to offer by way of properties priced around R400K. “These new developments on the Bluff are well priced and are selling within weeks. This is quite something if you compare it to the other Durban suburbs.” On the sectional scheme front, Jaco says that The Bluff has great offers for first-time buyers. “The starter market has wonderful 1-2 bedroom flats for between R400 and R650K, depending on the area.” With an easier entry level property price than most – check out what’s for sale in the Bluff. Perhaps that little pad by the sea isn’t so far out of reach after all.

How to develop colourful kitchens
Introduce a broader colour palette in the heart of your home with these tips.
2022 décor sustainability trends to watch
This year, most home owners will be making more conscious choices regarding building materials and décor items.
Importance of home inspections
There are good reasons for home buyers to insist on a professional home inspection before signing an offer to purchase.
Rental property maintenance on a shoestring budget
Maintaining your property can be done without a huge budget. Here is some maintenance advice for landlords.
Browse the Advice Centre