The FNB Building Confidence Index (FNB BCI) measures the business confidence of all the major role players and suppliers involved in the building industry including architects, quantity surveyors, contractors, sub-contractors and retail merchants and manufacturers of building materials. The index is compiled quarterly from the building, manufacturing, and retail opinion surveys undertaken by the Bureau for Economic Research (BER) at Stellenbosch University. The BER business survey in the building industry was conducted between May 3 and June 1, 2010. The index dropped from a value of 30 in 1Q2010 to 24 in 2Q2010. Of the six sub-components of the FNB BCI, five registered a drop and in only one case a marginal increase was recorded. Compared to 1Q2010, the following declines took place namely, quantity surveyors (-2), building contractors (-6), sub-contractors (-2), manufacturers of building materials (-2), and retailers of building material (-24). In the case of architects, a small rise (+1) was recorded in 2Q2010. The foregoing indices clearly indicate that the domestic building industry remains in a firm recessionary grip at present. FNB Chief Economist Cees Bruggemans says that the BER results indicate that business conditions in the residential sector remain tough and based on building statistics published by StatsSA in respect of residential buildings plans passed in 1Q2010, the situation is unlikely to be reversed dramatically in the near term. Notwithstanding the sharp drop in the mortgage rate of 550 basis points, factors such as cautiousness on the side of consumers in an uncertain domestic and global environment, buying existing homes cheaper than to building new ones, as well as still high debt levels are constraining a meaningful recovery in the home building industry. In the case of the non-residential sector, business conditions are tightening as the investment spurt in non-residential building in the private sector, which increased by around the 20% mark in real terms during 2009, is coming to an end. StatsSA data shows that non-residential completions decelerated notably in 1Q2010. According to Bruggemans, the business confidence of residential contractors decreased from 26 in 1Q2010 to 21 in 2Q2010. This decline followed on a moderate revival in confidence levels over the past three quarters from a comparatively low base. He said that respondents to the survey indicated that the growth in building activity remained more or less unchanged during 2Q2010. Overall business conditions are tough and new work remains scarce. In this regard, a net 83% of the respondents indicated that the lack of demand for their services was constraining their business operations. Tendering competition escalated in 2Q2010. Whereas a net 47% of participants to the survey indicated a more stringent tendering environment in 1Q2010, the corresponding figure increased to a net 59% in 2Q2010. The result was that margins remained under severe pressure, adversely affecting the overall profitability of respondents. A further moderate retrenchment of labour therefore became necessary during 2Q2010. As far as the outlook for 3Q2010 is concerned, he noted that respondents expect a slight improvement in the overall business environment and growth in building activity. John Loos FNB Property Strategist stated that the business confidence of non-residential building contractors dropped from an index value of 26 in 1Q2010 to 18 in 2Q2010. The latter index is half that recorded in the corresponding quarter a year ago. Loos said that the growth in building activity underperformed expectations during 2Q2010. Compared to 1Q2010, the growth in building activity remained more or less level pegged. However, the demand for new work has deteriorated and a net 89% of the respondents to the survey indicated that they regard the insufficient demand for building work as a major constraint affecting the viability of their businesses. Competition in tendering escalated during the quarter, with the net percentage experiencing a keener tendering environment rising from 67 in 1Q2010 to 87 in 2Q2010. The tighter tendering environment led to downward pressure on margins and a net 87% of the survey respondents indicated that their growth in profitability was below that of the same quarter a year ago. Indications are that no large scale retrenchments were undertaken during the quarter, but employment levels remain well below that of the same quarter a year ago. In conclusion, Loos said that in view of the survey results and the normal lagged nature of the private non-residential building cycle compared to the overall business cycle, non-residential building activity is likely to remain under pressure for some time ahead. The situation is likely to be aggravated by widespread reports that government expenditure on non-residential buildings are underperforming as a result of insufficient managerial skills and other constraints, particularly at the provincial and local level. 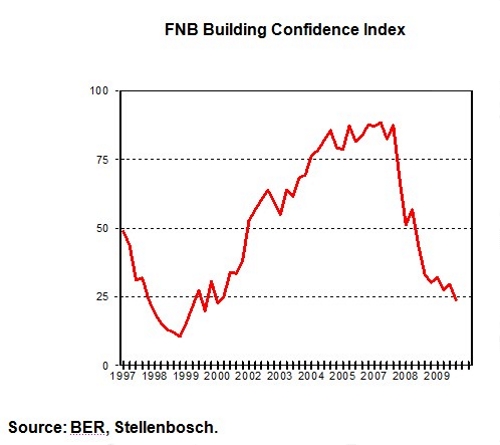