The 3rd Quarter Joburg FNB Residential Property Barometer pointed to a further rise in residential demand activity levels in the region. It would now appear that the positive effect of 5 percentage point’s worth of interest rate cuts since December 2008 is increasingly being felt in the property transaction volumes, with banking sector relaxations in lending criteria also playing a positive role. The Property Barometer is a survey of a sample of estate agents in the region regarding their personal experience of market conditions. The main Barometer question relates to the level of demand activity, and agents are asked to rate the level of demand that they experience on a scale of 1 to 10. After an initial rise in the preceding 3 quarters from 4.1 as at the 3rd quarter of 2008 to 4.9 in the 2nd quarter of this year, agents estimated that activity jumped more significantly from the 2nd quarter to a 3rd quarter level of 5.47. The 3rd quarter survey was undertaken in mid-August. 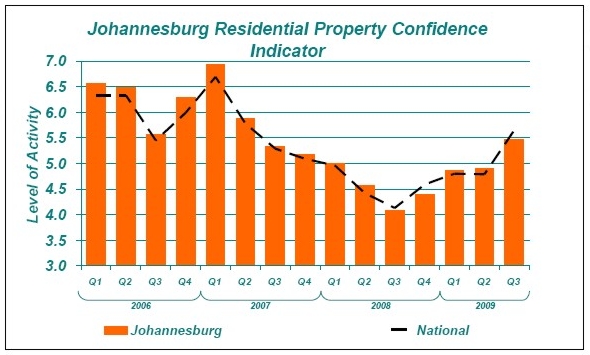 Although confidence levels are steadily improving, Joburg survey respondents are slightly less upbeat with regard to activity levels 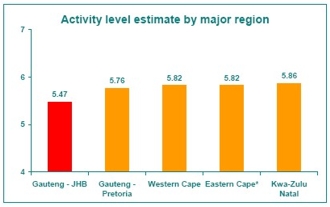 Although the region’s activity levels are steadily improving, the agents surveyed in Joburg rated the region as having the lowest activity level of all 5 major regions, at 5.47. The three major coastal regions’ agents surveyed, KZN (5.86), Eastern Cape (5.82), Western Cape (5.82) are now more upbeat in their estimates of activity compared with Joburg, while Tshwane (5.76) also has a slightly stronger reading than its neighbouring Gauteng city. Seller expectations appear to be becoming more realistic The percentage of properties sold at below asking price showed a significant decline from 86% in the 2nd quarter to 77% in the 3rd quarter, while the average time of a property on the market prior to being sold declined sharply from 21 weeks and 6 days in the 2nd quarter to 16 weeks and 6 days in the 3rd. These two indicators, when read together, point towards more realistic pricing by sellers. The greater realism may not only be due to sellers setting prices lower, but also due to the market catching up to price levels, therefore making previously unrealistic price levels now a little more realistic in a stronger market. 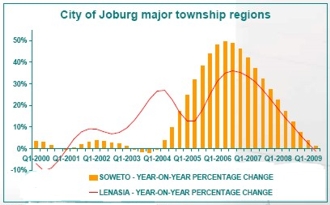 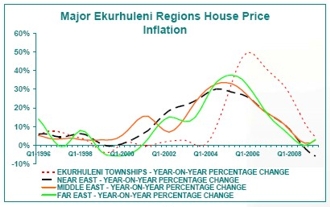 Interpretation/Conclusion__ Although not expected to be a strong recovery, it is clear that a recovery in the Joburg residential market is well under way. Demand activity has risen consistently over the past 4 quarters, while other key indicators such as average time on the market and percentage of sellers achieving their asking price have also improved. Deeds data runs a bit behind, but while area price deflation was still widespread as at the 2nd quarter, one could begin to observe some of the Joburg regions’ price indices beginning to turn for the better. To date, the market improvement is largely the result of interest rate cuts, and banks’ responses to better market conditions by relaxing lending criteria have reinforced the trend.