Another unchanged interest rate decision is not expected to derail the housing and mortgage demand acceleration during the first half of 2010, but a 2nd half plateau may await. The South African Reserve Bank (SARB) Monetary Policy Committee (MPC) once again left its policy repo rate unchanged at 7%, implying that the predominant prime rate will remain at 10.5%. Its view is that, after a brief rise to above the 6% target range in the coming months, consumer price inflation will decline back into the target range on a more sustainable basis, but that it will remain more to the high end of the 3-6% target range. While it cites weak domestic demand as a major plus in dampening inflation pressure, against this it believes the mooted Eskom electricity tariff hike is the big upside risk to inflation. All this means that prime rate has remained unchanged for almost half a year since August 2009, following 500 basis points’ worth of cuts in quick succession prior to then. 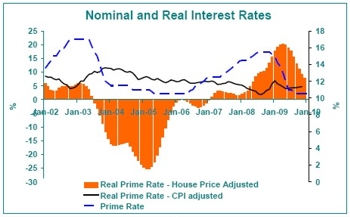 Given that residential property is so strongly credit-driven, and thus heavily reliant on interest rate moves, the sideways movement of interest rates begs the question as to for how much longer residential demand can continue to accelerate. Views about how long it takes for the full impact of interest rate cuts to filter through entirely into the economy often range from 18 months to 2 years. That would suggest that somewhere late in 2010, as we get to near 18 months since the final rate cut in 2009, and assuming that rates remain flat for the entire year, we would probably be getting near the end of the stimulus from last year’s cuts. For the residential property and mortgage market, given that they are leading sectors in the economic cycle, this could be a little sooner, closer to the middle of this year, after which we expect to see accelerating demand starting to plateau. Although anticipating residential and mortgage demand growth reaching a plateau later this year, that does not change our expectation that 2010 as a whole will be a significantly better year than 2009. The unchanged prime rate probably implies a decline in real prime rate in the near term, according to the CPI-deflated measure as well as the house price deflated measure, given the expectation of some rise in both CPI inflation as well as house price inflation in the coming months. However, the still-positive real prime rate, according to the house price measure, continues to make short term property speculation by-and-large an unattractive pastime.

Autumn interior design 2021
Every year, there are interior design trends that become the go-to decor style for many people who wish to make their homes warm and inviting during the colder months.
Decorating your holiday rental
It's important to furnish and decorate your holiday home in a way that will attract people of different aesthetic requirements across different demographics.
How to choose the perfect lighting for your home in autumn
It’s possible to still have a bright home that is cosy and comfortable even if your home gets way less sunlight in autumn.
A Homeowner's Guide to Geyser Maintenance
Home mantainance involves caring for important components such as a geyser. How should this be done?
Browse the Advice Centre