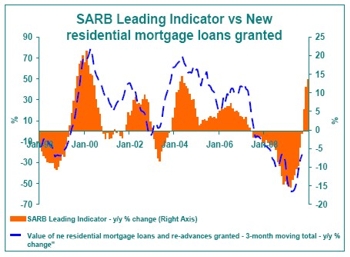 The further acceleration points to the strengthening trend in the residential mortgage market probably still firmly on track. However, although it is too early to draw conclusions based on 1 data point, a slowing in the rate of year-on-year increase in the SARB Leading Indicator could imply that the mortgage market is to approach its growth peak in a few months time. The Leading Indicator has a global economic component to it. Given the recent improving global economic prospects, these could be expected to be having a positive impact on the Indicator’s growth. Locally, it has a strong focus on the manufacturing sector, which is very responsive both to global economic events as well as local interest rate moves, also includes a construction and trade sector component, as well as moves in JSE which can be a good indicator of market expectations for the economy in the near term. And then, very importantly for the residential sector, it has an interest rate component. It is possible that the slowing in the pace of acceleration in growth of the indicator is pointing towards a lack of further interest rate stimulus, with the last rate cut having been back in August 2009. While there must surely be some stimulus still to feed through from last year’s rate cuts, we are of the opinion that this stimulus will wear out somewhere in the second half of 2010. Then, it will be up the economy to support further growth in the residential property and mortgage market. We have seen the manufacturing sector recovering, as a result of some global recovery as well as due to the need to “re-stock” the economy after a considerable inventory run-down. Positive economic growth is indeed expected for 2010, but it is not expected to totally replace the positive stimulus for the residential mortgage from 2009 interest rate cuts, and as a result we expect new mortgage loan growth to peak around mid-2010 and taper off gradually thereafter, as the interest rate stimulus wears thinner.