Bryanston is one of those leafy upmarket suburbs that even though it is often regarded as being pricey has some properties in the mid- to high-end range.

Estate agents note that Bryanston consists of freehold, sectional title and cluster homes and has retained its reputation as a leafy family suburb and its properties remain in demand among those seeking value and a good address.

Lestella-Anne Long has lived in the suburb for 20 years and finds that it’s not only a friendly community suburb, but it is also conveniently located close to major roads and highways as well as neighbouring suburbs.

Bryanston has a number of good schools such as Bryanston High School, St Stithians College and Brescia House School, among others.
There are also a number of shopping centres to choose from, and the recently revamped Riverside Shopping Centre continues to offer convenience to many residents and those driving through the suburb on Bryanston Drive.

Opposite this centre is the newly built and still to be fully occupied Riverside Junction which offers retail centres, offices and restaurants. This is also home to the popular Jackson’s Real Food Market which relocated from Riverside Shopping Centre.

Bryanston is also home to the upmarket Bryanston Country Club which offers an 18-hole golf course, bowling greens, squash and tennis courts as well as a swimming pool and lapa.

Lestella-Anne says one of the suburb’s best-kept secret is Bryanston Fresh Fruit and Flowers at Cramerview Village Centre located close and a mere walking distance to the Mediclinic Sandton. This small centre offers basics that residents need and it even has a petrol station.

Take a spectacular journey through the Sandton and Bryanston neighbourhood here: 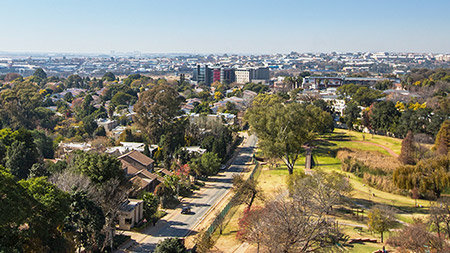 Sandton is a vibrant, modern neighbourhood that contains the richest square mile in Africa. It is the business gateway into Africa for many large corporations and attracts thousands of ambitious people seeking their fortunes. But Sandton is not just about big business, residents find plenty of time for leisure too. World class shopping centres, and a buzzing social scene are a huge hit with the young and young at heart. Perhaps surprisingly, there is a huge amount of green space in the area that residents take advantage of to exercise or just take a breather.
Browse the Advice Centre