Bedfordview due for a wake-up

The upmarket suburb of Bedfordview is home to a cosmopolitan population and a host of new development opportunities.

Demand has been patchy in Bedfordview over the past few years, according to both Nicholas Kempen of Harcourts Kempen (Bedfordview) and David Ingle, MD: Seeff Bedfordview/Edenvale, with Ingle saying demand has been good for secure cluster and sectional title residences. “But large traditional homes in the suburb are perceived to be and have to an extent been exposed to crime, are expensive to maintain and their value has slipped,” he says.

Having said that, Bedfordview offers some of the best value in residential freehold of any upmarket area in Johannesburg.

This is evident in the steady growth in the average house price over the last five years, says Kempen, noting the average house price for freestanding homes and clusters is just over R4,1m as at June 2015. “This is a figure that is set to rise over the next few years as more ultra-luxurious homes find their way to the marketplace,” he says. “The bulk of demand for the area is in its many gated-off roads, high-end cluster estates and modern sectional schemes.”

Buyers come from the wider East Rand and Johannesburg South regions, as well as from Cape Town, thanks to the suburb’s easy access to highways and its proximity to Gautrain stations and OR Tambo International Airport.

Despite its excellent schools, parents continue to live in the north and drive their children every day to Bedfordview. A reason for this, according to Ingle, is that the North enjoys better marketing. “The North has a proactive council, while Ekurhuleni has been less focused on upmarket development opportunities,” he says. “Bedfordview does not offer the secure estates offered in the North. Some of the schools in Bedfordview are good, solid establishments that have been around for many years.”

Building activity in the area is taking place on both open land and existing stands, says Kempen. “Many of the older, traditional homes on stands greater than 2,000m2 are being completely renovated into open-plan, modern living spaces, and the ground subdivided and sold off for the development of an entirely new dwelling,” he says. “This year we have seen some large vacant plots of 8,000m2–10,000m2 come onto the market. These plots are ideally suited to developers looking to construct secure cluster homes in line with the latest architectural trends.”

The suburb is due for a shot in the arm, however, with the R84bn city development in nearby Modderfontein and Linbro Park.

Area Review: Durban - going with the flow
Not all sectors of the housing market have been affected by the property slowdown.
Changing face of Waterkloof
Waterkloof is getting younger, if the ages of recent buyers are anything to go by.
Llandudno estate agent Q&A
Find out what it's like to live in Llandudno, Located in a spectacular setting along Cape Town’s Atlantic Seaboard. 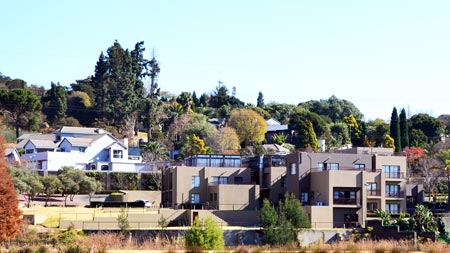 Perfect for families, young professionals and business owners, the affluent town of Bedfordview is close to many industrial and business areas, such as Johannesburg South. This lush area boasts many excellent schools, and various fun activities for the whole family. Bedfordview overlooks the bustling Sandton area, however has none of the traffic congestion of such an area. The police and security companies in this area work well together to provide a safe environment for residents.
Browse the Advice Centre