Described by one resident as the “Monaco of South Africa”, Plettenberg Bay is the playground of the rich – and tourists. And though you won’t find too many “tax refugees” in Plett, you will find plenty of refugees of another kind: upcountry folk who have fled Gangster’s Paradise to live a safer and quieter life in this picturesque seaside town also known as “the jewel of the Garden Route”.

Greg Stroebel is an estate agent in Plettenberg Bay. He has been selling property for 12 years and is a franchisee for an exclusive national real estate brand. Greg was born and bred in Plett and knows the place like the back of his hand. “Plett stock is aimed at its target market: people who can afford to own holiday homes here. The quality of property in Plettenberg Bay is higher and so too is the average sale price.” Certainly, prices are at the top end of the market in Plett are sky-high.

Expect to pay anything from R26m for a seven-bedroom, seven-bathroom mansion to R12m for a four-bedroom, three-bathroom older house. At the lower end of the market, you can find a 100 square metre lock-up and go for between R1.3m and R950k.

The real estate market in Plett

Like the rest of the country, Plett has not escaped the slump in the real estate market. But Greg says there is activity in some sectors of the residential market. The R1m to R3m market is busy, but properties priced R4m and over aren’t moving as fast, he says. Greg estimates that about 60% of the property for sale in Plett is priced between R1m and R4m, and he reckons that 25-30% of property in Plettenberg Bay is overpriced. “Some sellers still have expectations that are a bit ridiculous. But it comes down to their motivation for selling. Some people have no choice but to sell, whereas others have no need to sell, so they aren’t budging.”

Like many coastal holiday towns in the Western Cape, Plett experienced a development boom about five years ago, attracting speculators in their droves. “We had a rush of people buying off plan – people who, for instance, bought four stands with the intention to sell three and build on one. Some have sold and made no gain. Speculators have been worse affected than home owners.” Data from Lightstone shows that almost 44% of recent sellers in Plett have owned for less than five years. Greg says someone he knows bought a flat for R630 000 three years ago and can’t get R650 000 for it now. “The market is 20% down nationally. Some places priced at R4.8m are fetching in the region of R3.8m.”

It’s obviously a good time to be buying in Plett. Greg estimates that there are about 350 properties on the market and some good deals to be had. Colin Levitan has lived in Plett for 11 years. He’s an independent estate agent and also owns a popular coffee shop in the town. Colin reckons now is a good time to pick up a bargain in Plett. “A lot of people in Plett are asset rich and cash-strapped. They have to sell to get their hands on some dosh.”

Not all houses in Plett sell

He says that while Plett has its share of opportunistic sellers, there are also those die-hard sellers whose properties have been on the market for three to four years. “Some houses for sale have been on the market for so long that the boards have rusted.” At the end of the day, Colin says, there’s a glove for every hand and the market will decide. He cites the example of a house for sale for R2.6m which eventually sold for R940k. Colin says Plett has plenty vacant land and that it’s possible to find an 800 square metre stand for R350k. When it comes to rental properties in Plett, Greg says that in the middle to upper band, you can find something to let for anything between R10k and R30k a month.

When should you visit Plett?

Although Plett has grown from a resort into an established town, it’s still a holiday town that exists to serve tourists and holidaymakers. In peak season it can be unpleasant. Whether or not it’s your cup of tea, Plett deserves its original Portuguese name “Bahia Formosa” – or Beautiful Bay. In fact, the name doesn’t do it justice for the bay is not the only beautiful part of Plett. The surrounding Outeniqua, Tsitsikamma and Langkloof mountain ranges are spectacular, as are the indigenous forests in between. 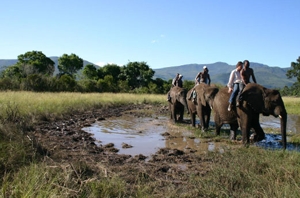 This mix makes for a glorious outdoor lifestyle. Take your pick from diving to whale-watching or hiking in the Robberg Nature Reserve, bird-watching at Birds of Eden, bungee jumping off Bloukrans Bridge, getting up close and personal with an African Elephant at the Elephant Sanctuary, or getting acquainted with our ancestors at Monkeyland. It’s a glimpse of paradise ...

Make room for more family members
Family members are part of our human existence. These are the dos and don’ts when extending your existing home to accommodate family members.
Impact of higher fuel prices on commercial property
Fuel price hikes impact consumers and the economy, so some impact on the commercial property market is to be expected.
How to create a wall collage of photos
You can follow these steps to create a striking wall collage of framed pictures.
Make room for more positive energy
Decluttering, gardening and family time can assist you in creating positive energy. How can this be achieved?
Browse the Advice Centre