After surging from +6 in 4Q2009 to +15 in 1Q2010, the FNB/BER consumer confidence index (CCI) remained virtually unchanged at +14 in 2Q2010. Given that consumer confidence surged briefly by a hefty 27 index points when South Africa won the bid to host the World Cup Soccer Tournament in 4Q2004, consumer confidence could easily have increased once more during 2Q2010 as a groundswell of excitement took hold of the whole country in the last month before the start of the final event. Another reason why confidence could have risen further during 2Q2010, is that the prime rate was reduced by a further half a percentage point since the previous survey. The fact that consumer confidence held steady during 2Q2010 indicates that these positive factors were to some extent countered by negative ones. During 2Q2010, slightly fewer consumers expect an improvement in their own finances over the next 12 months compared to 1Q2010. Virtually unchanged were the consumers rating the present as the wrong time to buy durable goods (such as furniture, appliances and electronic goods). However, in terms of the third question making up the FNB/BER CCI, slightly more consumers than previously expect the economic performance to improve over the next 12 months. “Overall consumer confidence thus remained more or less steady as consumers’ somewhat more pessimistic views on their own finances were balanced by slightly more optimistic views about the economy”, said Cees Bruggemans, chief economist of First National Bank (FNB). A further elaboration of the three questions sheds perhaps more light.

Other factors that could have weighed on consumer confidence during 2Q2010 include the following:

In Conclusion: The 2Q2010 results indicate that the FNB/BER CCI took a breather. It would probably have declined were it not for the World Cup. Bruggemans said: “Although consumer expectations about the economic outlook and own financial prospects remain very positive, there also lingers an apparently deep unwillingness in important consumer segments to buy consumer durables at this time and to incur the associated debt”. “Also, consumers’ overall high confidence and consequently high willingness to spend is unlikely to translate to bigger rises in actual spending until households’ ability to spend improves more pronouncedly”. This requires, among other things, a recovery in employment to boost income and a rebalancing of household balance sheets to stimulate credit spending. 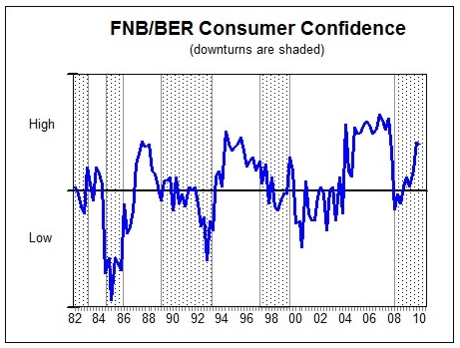 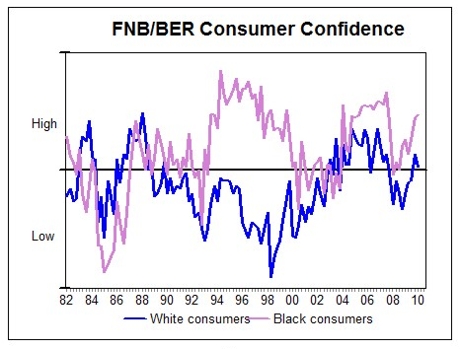 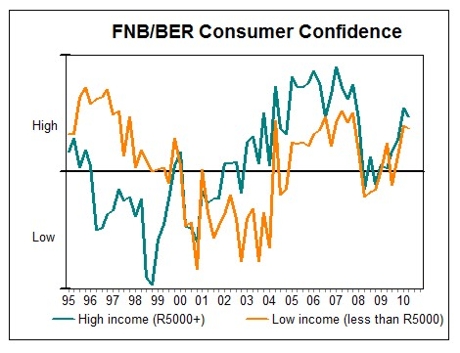 Residential sectional title sales again on the rise
Sectional title property market in South Africa has recorded increased business activity rising from 13% of total sales in 2005 to nearly 28% in 2020.
Should bond equity be used for debt?
Paying off debt requires a careful consideration of important factors such as interest rates and sources of finance. Should using equity be considered?
Young buyers are dominating the property market: What are their expectations?
The property market has continued to record an increased number of young buyers. What type of dynamics are behind this shift?
Opportunity in a time of Covid-19
The Covid-19 pandemic has adversely affected various business sectors but has also opened up some interesting opportunities.
Browse the Advice Centre