Various economic indicators point to a gradual recovery in the South African economy. These include the South African Reserve Bank’s leading business cycle indicator, which has risen uninterruptedly for a period of six months up to September this year; positive quarter-on-quarter real GDP growth of 0,9% in the third quarter; an improvement in the purchasing managers index, which measures manufacturing activity; and slightly higher levels of business and consumer confidence. However, households are still struggling with relatively high levels of debt in relation to income, tough labour market conditions and declining real disposable income. In view of these developments, housing market conditions are expected to improve further in 2010, but it is set to be a gradual process with nominal price growth forecast to remain in single digits over the next twelve months. In the first eleven months of 2009, nominal house price deflation averaged 0,5%, compared with the same period last year. If recent trends in price levels prove to be sustainable, nominal price growth of at least 5% can be expected in 2010. Real house prices are forecast to decline for a second consecutive year in 2009, with at best a small real increase next year, based on nominal house price and consumer price inflation trends and projections. 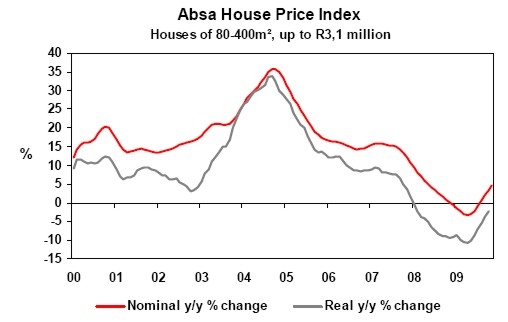 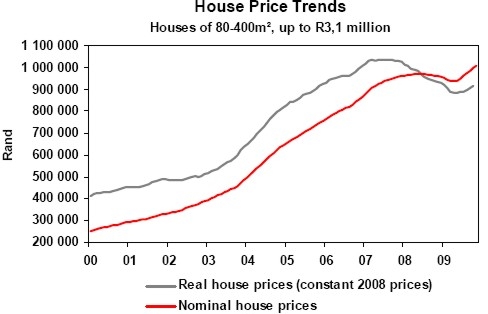