What you need to know after buying your first home

Record-low interest rates have driven up the number of first-time buyers in the local property market. While the process of purchasing one’s first home is a steep learning curve in and of itself, there are other ongoing concerns for homeowners about which first-time buyers will need to become familiar.

“There are several regular occurrences within the broader economy that can affect homeowners – many of which can take place without a homeowner’s knowledge if he/she is not made aware to keep an eye out for them,” explains Regional Director and CEO of RE/MAX of Southern Africa, Adrian Goslett.

The first and most regular of which are the interest rate meetings that occur once every two months. “The Monetary Policy Committee (MPC) meets every second month to decide whether interest rates need to be adjusted to combat inflation and manage other risks to our economy. New homeowners will need to listen out for these announcements, as these will have a direct impact on the interest charged on their home loan. Historically, the MPC usually adjusts interest rates by around 25 basis points, which means that homeowners bond repayments could fluctuate slightly over time. Being aware of when the announcements will take place can help homeowners remain informed and prepared for these changes,” Goslett advises.

The second occurrence of which many first-time buyers are probably unaware is the General Valuation (GV) Roll that is used to calculate household’s municipal rates. The GV is valid for a period of four years and is presented to the public for inspection before any new rates are implemented. Based on geographical information and recent sales in a given suburb, the city uses a computer-aided mass appraisal (CAMA) system to determine the values of all properties. “Homeowners will need to check if they agree with their property’s valuation in the GV, as this will have a direct impact on how much their municipal rates will be going forward,” warns Goslett.

To check this, homeowners will need a municipal account on hand as they will need their stand and portion number to search for their property. If a homeowner disagrees with the valuation provided for his/her property, there is a period to object. According to Goslett, the starting point for a strong objection will be to include a neighbourhood evaluation, which can be obtained from a reliable real estate expert, which would justify why the valuation of your property should be lower. It may seem counter-intuitive to want your home to be valued as less, but the lower the value of your home, the lower your municipal rates will be.

One last regular occurrence of which first-time buyers ought to be aware is the annual budget speech. “Listening to the whole speech might not be necessary for those who are not interested, but I would strongly recommend that homeowners pay attention to the news reports following the annual budget speech to be on the lookout for any announcements that might affect their income. During this meeting, the finance minister can announce adjustments to a whole range of items that could either directly or indirectly affect homeowners. Announcements that would have a direct impact include any changes to the transfer duty thresholds and capital gains tax, as this will affect the costs of buying and selling property in general. Other indirect impacts include changes to the income tax brackets, VAT and other taxes, as this will impact a household’s income which might affect one’s ability to afford the bond instalments,” Goslett highlights.

As a final word of advice, Goslett recommends developing an ongoing working relationship with a reliable and knowledgeable real estate professional. “It can be daunting to take on all of the new responsibilities of homeownership, especially if these concepts are unfamiliar to you. Good agents understand that the real estate business is about building and maintaining relationships. A good agent will be focused on securing a client for life, rather than just the commission from one transaction, which means they will be more than happy to be your point of call if you have any questions or concerns about homeownership,” Goslett concludes 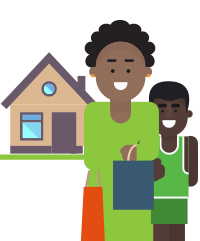 Residential property remains a sound option for investment
Investing in residential property is a worthwhile investment avenue worth considering. Why should this be considered?
Top 3 Reasons to Own your Own Property
Are you debating on whether purchasing a property is the right move for you? Here are 3 reasons why you should buy your own property.
Six things to do when you buy your first home
Buying your first home is an exciting experience. These are the things you need to do during this process.
Browse the Advice Centre